“We navigate a passage through a jagged archipelago of partly submerged questions upon the raft of language.“ Kevin Brophy, “Shame-Job“, Meanjin, Winter, 2019.

“The power of incompetence may be one of the most inscrutable phenomena of the modern political age, but it certainly works.

Why else would a man like Boris Johnson feign it so carefully?” Annabel Crabb.

At first glance, the Drone seems to enjoy a privileged position: he is simply required to impregnate Women. They will take care of the rest, with the aid of the Hive. They will connect with other Women to form communities, within which they will raise the children, for whom Daddy will be a frightful imagination of Otherness. The Prodigal left; the Drone elects a life sentence. Diploid children are welcomed by the Sisterhood as relief for any of their three full-time jobs, food gathering, child raising and home maintenance, but haploids are a nuisance. Their demand of equality has always been a problem, but in recent times, when more and more haploids have been affecting to be diploid, that demand has become a real problem. Diploids are workers, not shirkers. 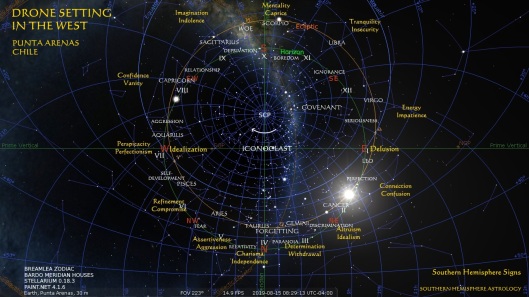 ‘Meaning’ is all too often regarded as drawing a statistical line through difference. Actually, the term ‘meaning’ should be restricted to references to romance’s opportunity for a new basis for personality, a new mean of identity, a new origin, and a new incarnation of the Force. A Girl needs to learn what it means to have haploids and diploids in Her class, and how to deal with both. A Boy needs to learn to navigate in order to congregate, and must overcome the fear of losing his balance and turning himself inside out. 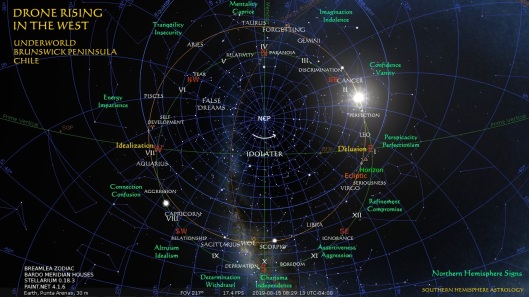 The Drone, or haploid Male, until stimulated by a sunset yearning which floods the west with Her oxytocin, dwells in the Underworld, asylum for the Hive’s superfluous ones, or so it feels when He is accustomed to sunset rising and other upside down signs of an opposite existence. Bathed in Her oxytocin, the Drone is frantic for a meaning–although on the wrong side of the history of that term–to the fusion of opposites at the Vertex whose power (in the Force) safeguards his redundancy. Of course, being haploid is a competitive thing. Once the Sun has gone to the Underworld She may be in the habit of craving humour rather than dependability, and a Drone’s repertoire is limited to one shot. Furthermore, the Force evolves. It really is the case that She seeks salvation of a different order as She gets older. What did you imagine those endless safaris into the Tropics were about? 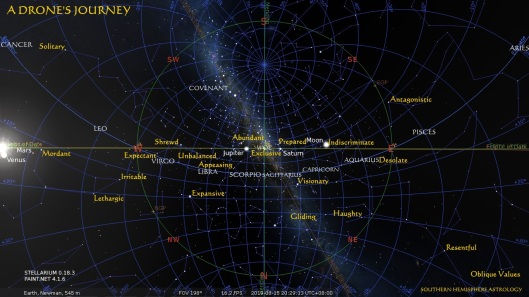 Washing out the Emu of a Warrior sky, the Drone finds himself this time within a degree of Deneb Algedi, who, like a goat’s mouth (seen in the northern sky) isn’t fussy about what congregation She gets into. And so the Vertex and its opposite evolve towards death without God or Heaven, and Nirvana, like oxytocin, has no real existence in the eternal release from the wheel of rebirth and suffering which is ordained by the Force. The Drone joins the congregation in the Tropics, where Eternity always becomes Permanence because Cynicism always becomes Idolatry. This is serious stuff, where adults beyond transport grids seek to exchange transferable tickets to unlimited travel.

By what mechanism did the Drone find His way at the precise moment of His brightest shining to this place, which if it did not exist, would have to be invented, where the Zodiac, arcing directly overhead from due East to due West, and the Milky Way, arcing in a straight line from North-east to South-west, form a crossroad directly over an observer’s head. In little more than three minutes–how accurately the time of birth must be recorded on the Tropic of Capricorn around 18:00 Local Apparent Sidereal Time–the Anti-vertex has whipped from idolatry in the Tenth House through fantasy, delusion, convention, narcissism and finally cynicism high above in the House of the intellect. No wonder the Drone needs the heroism of His ultimate journeys constantly rehearsed. And no wonder it is! His deaths in the mansion of Deneb Algedi number in the millions and have required of His mystique absolutely everything.

Flight, heroic journey, mystery lover, significant other? Around and around we go, echoes of madness in the Bardo of a queen’s Spermatheca. The Zealot, you may notice, always narrows himself into the correct precedence, and bullies have always been the socialities most easily socialized: next year, mate, you can be the Drone’s survivor, as you always were. 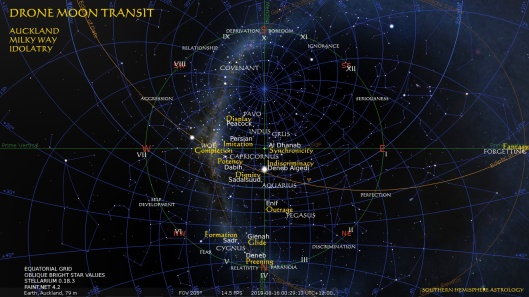 The Force is other than country. On my country, the phases of ancestry are synchronous with the six moments of the Milky Way, the values of the stars are devices of the poetry of landscape, and the cycle of Full Moons is a music of heroic impotence. The Force, meanwhile, is where my country loses its emptiness, where there is no when to be absent from, and where I am nothing but inscrutable purpose in an instant of virtual forgetting, like the flight of a Drone.