We have reached the last days of Spring. Tomorrow, the Sun will enter Libra in the Breamlea Zodiac, the Once A Jolly Swagman Sign which in its quintessential Australian way portends a Northern copper’s boot for the Centaur’s indiscretion of killing a Lupine sheep. Springtime has calmed down, accepted the limits of possibility in the habits and rules of co-existence, internalized the consequences of experiment and choice in a crowded world, and verges on Summer (on November 8 with the nightfall transit of Fomalhaut, the star of affirmation). 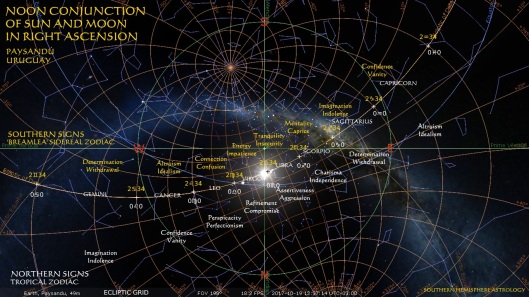 Shall we be friends, me and you, South and North, East and West? Can ‘country‘ integrate conscious and unconscious, the shared meanings of language and the personal meaning of poetry and music yet unsung? How rich must language be to nourish us with reverence for ancestors whose customs have departed with them, made invisible to us by ours? What can the loneliness and nostalgia for village of our foreign neighbour teach us about ours, forgotten in a similar experience buried in different words? We all carry the burden of our parents, but must we paper over it, and can we not honour them with our innovation and compromise? We must revitalize the invisible, and populate ‘country’ with mystery, ignorance and imagination, lest indifference overwhelm curiosity, and the black and white facts that we pass down to our children and our children’s children be dead ones, no more than the bare bones of a meagre vocabulary. 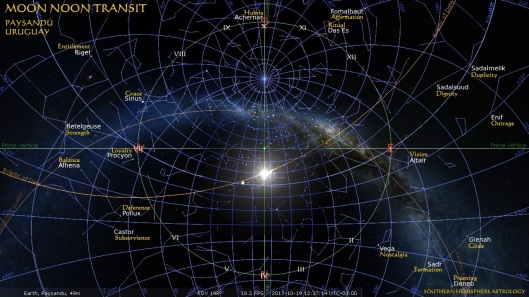 Hard to imagine, but the diameter of this horizon is only fifty kilometres on the ground, yet above it is half the universe. By the attributes invested in them by me, I know that the stars beyond the circle of daylight, if you rewrap the two-dimensional projection, are being gazed at by some Other in the Shanghai night who knows them by different names and attributes, in another language as timeless as mine, which tens of millions who do not even remember the stars are there are losing.

Friendship is defined in many ways, notably by the contributors to the Urban Dictionary, but I think the best definition of ‘friend’ is someone who ‘improves’ you, makes you feel kind–all kinds of kind are of a kind, kind of–and only incidentally someone who is kind to you. Not even your lover is your friend unless he or she fills you with kindness. Kindness is not charity. Rather than expecting something from a benefactor which never comes in adequate measure, we wait expectantly on our friends, so that we can lavish our attention on them, and discover more of who we are under their attention. There, not in identity-with, nor in identity-from, our true nature creates itself.

“In every waking moment, your brain uses past experience, organized as concepts, to guide your actions and give your sensations meaning. When the concepts involved are emotion concepts, your brain constructs instances of emotion.” Lisa Feldman Barrett. It is the primordial Mystery: Connection is my innermost Being. Community is made out of friendship, friendship out of emotion and emotion out of language; language is made out of emotion, emotion out of friendship and friendship out of community. This is what I believe gives power to the notions of ‘significant Other’ and ‘love of one’s life’ constellated by the Vertex: the ‘Over There’ feels like it is the ‘In Here’. Can a reason be imagined why the ‘In Here’ would repudiate its ‘In Here-ness’ ‘Over There’, other than a fundamentally disconnected and erroneous understanding of language made identity-fetish?

I implore you to interrogate, not forget, the language of the past. Before you tear down the monuments to the depravity of your ancestors, try to find the old words which masked separation and deprivation in the culture in which your great-grandparents were raised, and which were filtered by the emotions of your grandparents and in turn your parents and you. Before you remove the ruthless conquest of your indigenous people from your sight, remember that they whose memory shames you are of your spirit, your love, your kindness, your disappointment and your bitterness. There are words for the courage and dogged determination to survive in the middle of nowhere, and they are just as endangered as the language embedded in indigenous country. Befriend them. 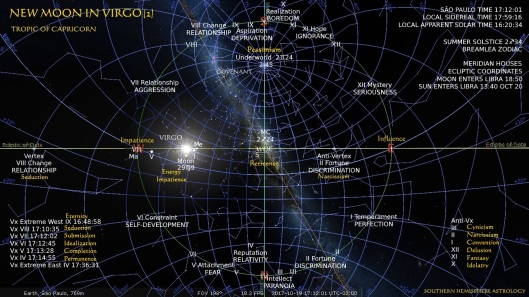 In this chart the official New Moon, when the two bodies have the same ecliptic longitude, is plainly exhibited at the moment the descending Sun is due west in São Paulo, because the Summer Solstice Point is crossing the Meridian, and São Paulo lies on the Tropic of Capricorn. The Sun’s path to the horizon is its line of declination on the equatorial grid presented, whose hour circles reveal that the Moon is already 1.5° past it. For reasons of symmetry with the stars and cardinal directions, I project the Breamlea Zodiac cusps by hour circles, and logically, the Moon is already in Libra, since the Sun is less than a degree from it. What beguiles me, however, is what is happening to the Vertex as the Ecliptic and Prime Vertical align. A midwife needs a ludicrously accurate time-piece in the tropics! In less than three minutes, the Vertex moves through five constellations. What tempestuous yearnings lurk in the tropical heart, if the Electric Axis really has any meaning. If dream lover and attachment style are just habits, they can be admired for their alacrity in the few seconds a day they enjoy for their reinforcement! 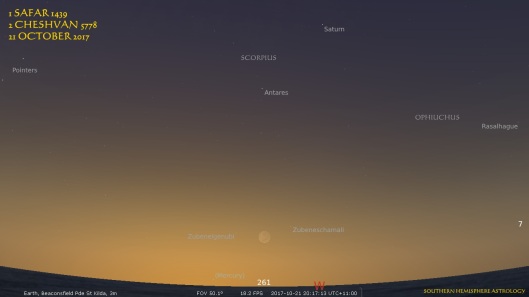 Religious scholars have been tabulating kindness for thousands of years, and making a decent living out of it, so it is no wonder that the primal, connective, responsive instinct of kindness has been institutionalized as charity, and that we have come to confuse friendship with ‘being there’ for someone. No matter, teaching your children to be righteous by obeying rules of justice and charity cultivates their attention, the conduit which affords intelligence of instinct, and instinct of intelligence. Attention alerts them to the quality of their friends as attentive friendship informs them of their own qualities. Bit by bit, their internal vocabulary expands to differentiate friend from fellow, benefactor from pauper, lover from frenemy, sharer from user. 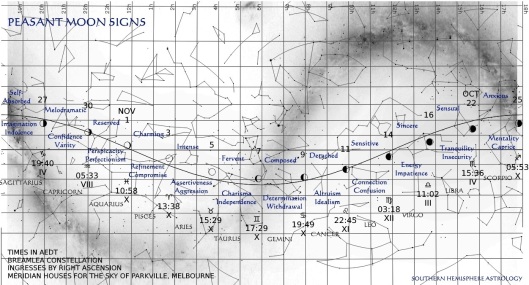 The unifying epiphany of materialism is the discovery of causality and connectedness, but the Miserere commemorates a different frame of reference, not the space of objects but the time of subjects, not the primacy of identity-with but the miraculous anguish of identity-from. Have mercy, Eternity.

You couldn’t get a more potent representation of balance and normality than the chart of the Prodigal’s transit over Ghandi’s ashram as the ‘Miserere’ arches from east to west crowned by vain Cassiopeia. How appropriate seem both Pisces’ Southern Hemisphere sign of Libran refinement and compromise, and its Northern Hemisphere sign of Aries, of energy with some impatience! What a princess! 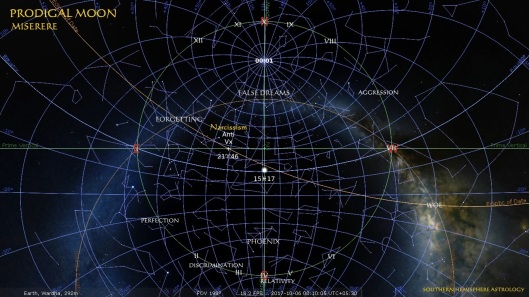 But let’s lighten up. ‘Prodigal’ means ‘wasted’, in both meanings of the word. If only he would stop abusing substances and locating himself in the ephemeral, he could come home to love and community, couldn’t he? He could find real purpose. But look at it another way. As it is fast becoming conventional wisdom to say, the wastage of his being in mere existence may be put down to our conditioning of his experience of unlovability. Oxytocin addicts are not very good at convincing others that they are loved. While his normal parents sleep, a prodigal soul might be seduced far from their philosophy into the arms of awareness bordering on mental illness. What is there to wake up to, in this unlovable world?

Lord, have mercy on the population which can’t live with You, but can’t live without You. Who but the slightly insane can understand the dedication of a life on this earth to spiritual liberation? Who, blessed by the growing body of literature on the psychology of love, could be so engrossed in love’s endocrinology that a life embalmed in self-help books might seem like a path to spiritual liberation? What else but the travails of unlovability can explain the attempt by astrologers and mystics to tabulate the relationship between the prime vertical and the zodiac? 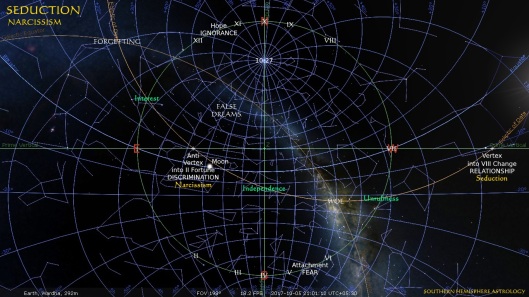 “Let’s play a game,” he says, totally out of it. “Imagine that we are robots, programmed at the factory to optimize the resilience and adaptability of artificial intelligence by embodying just enough order in chaos: depending on the time of year and day, we yearn to love in one of just six different ways in sequence, each involving its own geomagnetic drive, duration and triggering device. You have to guess which drive we’re in, and I have to guess if I am the right trigger. Let’s pretend Love!” Despite his wastage, or because of it, his notch on your barrel entices, if only for the beguiling recklessness it would add on your CV. 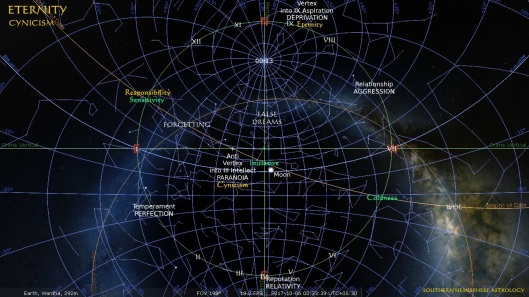 “Keep it up, funny man. The more you intellectualize, the more alert I become to feelings I didn’t know were there. I am germinating! Some inherited dream deep in my imagination has been given a name.” 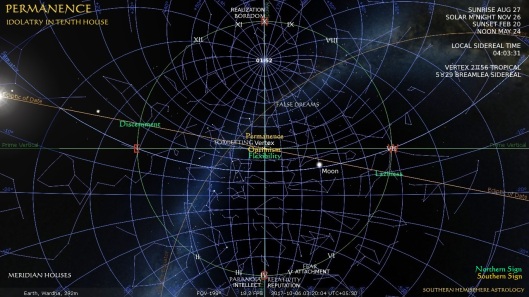 “What is it? ‘God’? I worship the goddess in you! You have the most intriguing hard and fast rules, and they’re all good! You know the best gifts to buy, and where from. You know what is appropriate behaviour, and what is not. You have beautiful paintings on the wall, fresh flowers in the vase, pithy quotations about positive attitude on the toilet wall! I dream about you! You have so many friends! I am so lucky!”

“I think it is ‘presence’. I convey my gratitude for what is to all around me, but especially to you, who get me so well.” 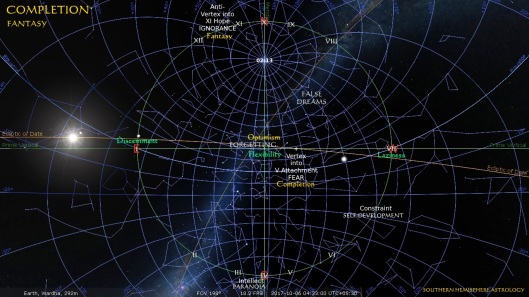 “We will travel. I want to share the world with you, and share you with the world. I want you in my family, and to love all my friends. They will love you as I do. I am lonely when I am with my friends since we became a number.”

“My father says you should get a job, and I want you to give up your addictions. We will have a child.” 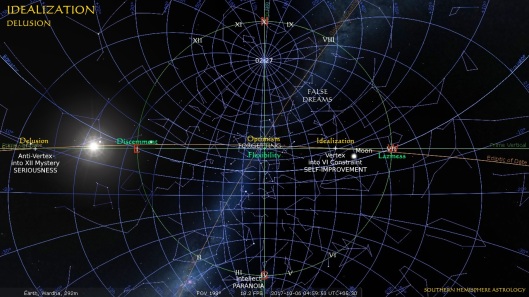 “Whatever you say goes! I can do it. I’ve just made some silly mistakes in my life, but the self-help books you’ve lent me have awakened me to my self-defeat mechanisms. I am ready!”

“Yes, you could write your own book with your amazing mind. Stop reading, and write. I believe in your power to transform yourself, as I have, through counselling.” 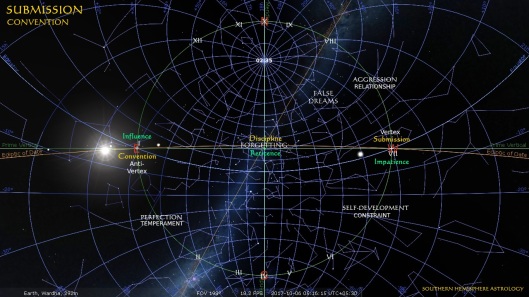 “I feel as though I have emerged from a dark cloud, since I learned how to be silent and listen. Your friends no longer tell you how arrogant and abrasive I am. I hope they don’t! Do they?” 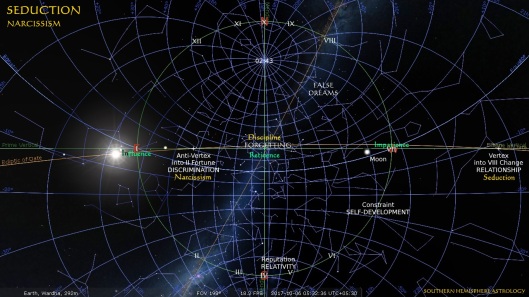 “I have become a little concerned that people I know don’t understand you. One has said he thinks you are ‘arid’. ‘No!’ I said, but it does seem strange that others can’t see how beautiful, and intelligent, and witty, and supportive you are. You were quite a catch.”

“Perhaps you didn’t catch me, and you need to work harder, now that I am getting older, and finding that I interest a whole different class of people. Incidentally, I ran into my ex at that do you didn’t want to come to the other night.”

Birds in backyards, who have an innate attunement to the hours, the Earth and the stars we can only dream of, are attracted by mournful music, because it’s the easiest to sing. Humans are currently attracted to the idea that romantic love is a construction of the Middle Ages perfected by Hollywood as a capitalist tool. If you buy the idea that real love, that which connects everyone and everything, is universal compassion, and anything else is a hormonal delusion, you’re still just singing the easiest song.