“I must not fear.
Fear is the mind-killer.

Fear is the little-death that brings total obliteration.
I will face my fear.

I will permit it to pass over me and through me.
And when it has gone past I will turn the inner eye to see its path.

Where the fear has gone there will be nothing.
Only I will remain.” 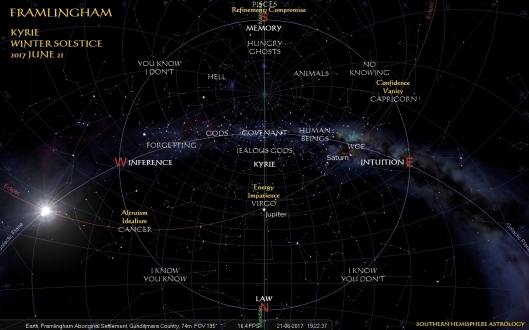 Never stand under a tree with a possum in it, especially if you’re facing north. 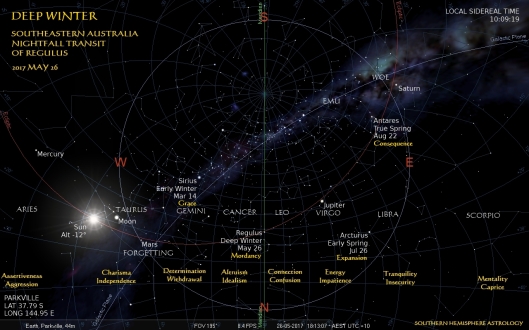 “Reality conforms to precedent certainly, and you can analyze it that way, but it is not imprisoned by immutable laws or patterns, any more than identity is. Reality is what you make of yourself, and you are what reality makes of itself, moment by moment.

I mean by reality conforming to precedent that there is something akin to intention in the world. Form emerges according to pattern. The context of an emergent thing encourages relations and structures that are readily available, practised, in a word.

A seed is an intention; the form a tree takes is an accident. If you would see a thing, you must look to the processes creating it, and they are always relational in the same way that you can never define where one thing ends and another begins.

The existence of a thing takes form, but that form is the carcass of its creative process. A thing is an imprint on the world which has left its imprint on the thing. This to me indicates the essence of identity.” Abliq.

Sahih Bukhari (49:857) – “He who makes peace between the people by inventing good information or saying good things, is not a liar.”

“Opportunism is the exploitation of form.” Abliq.

“This little planet causes more problems than it is worth. The side tilted this way is emerging from ice and snow and you would think its people could just happily forage for food and be done with conflict, but their leaders are playing “Mine’s Bigger Than Yours”, teeming millions are on the roads, displaced by war, famine and climate-change, the shamans are at loggerheads over what is fundamental, and prophesy, competing for scarce funds, seems unable to restore calm.

On the other side things don’t seem much better. Duty and self-indulgence have been their usual strange bedfellows during the summer. People haven’t made sufficient provision for the winter, and there will be anger and resentment boiling over when they are confined together and forced to share. 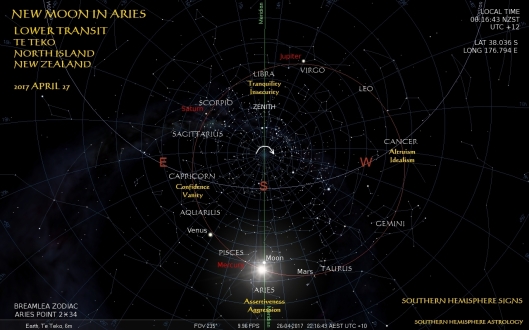 They don’t take much notice of me these days, and I confess it wouldn’t matter to me if they wiped themselves out, but you’re closer to them, you do care, and they still look up to you. Do something new. You’ve already tried uniting them with polarities. That’s not working fast enough. Say something to them that will placate them. Make something up, if you want. They stopped trying to agree on truth a long time ago, but though they shirk it, they crave it. Go on, little man, give them something to believe in. Their meanings are failing them, and if they don’t lift their spirits, they’re doomed.

[The grid indicates the declinations of the constellations and the paths they take across the meridian. Much of Pisces and all of Aries, Taurus, Gemini, Cancer and Leo will pass to the north, anti-clockwise with East on the right. What are the seasonal influences of March-August? Are they Northern or Southern Hemisphere, tranquil or aggressive, neither or both? Exegesis I, ii.]

That’s the style! Show them that their chaos might simply be a matter of facing the wrong way. Throw a bit of the others in with it: love, brotherhood, sisterhood, submission, everlasting life, success, affluence, celebrity, presence, healing, enlightenment, transcendence, emptiness. Use science and mathematics. They believe that. Restore awe, for God’s sake! Take a leaf out of the Artisan’s book and just make astrology work.

Nice! You’ve got country, a powerful indigenous notion, and one to cleanse evil spirits who come to whisper young people away from rootedness in creation. 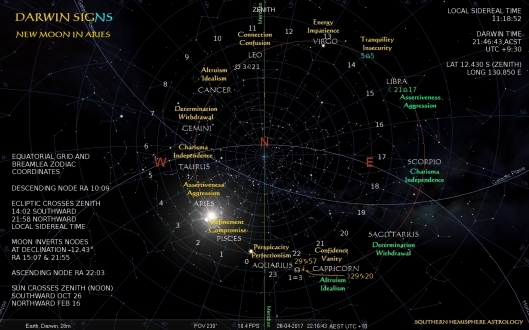 [Where you are on a two-dimensional chart, your ‘country’ as previously described, is at the zenith of your sky. Darwin people facing north would have to crane their necks 10º backwards to see the Sun in Scorpius and Sagittarius, and a backbreaking 30º+ to see all of those constellations. In fact, much of Scorpius, not to mention the Moon at major lunar standstills, is south of overhead at many southern latitudes, even when the Ecliptic is not. Furthermore, Darwin has only two seasons, Wet (November-April, conventionally) and Dry (May-October). Can these be correlated with the direction of the Sun, south with Northern Signs in green and north with Southern Signs in yellow, or to the chirality of east and west and to apparent clockwise or anticlockwise Zodiac motion? Exegesis I, iv.]

Embodiment, nice touch! Transform two dimensions into three by lying down under the stars, head one way or the other. Turning reverently to the qibla of choice, like a code for pollen danced by bees. Suitably mystifying. Let them look up with their own eyes into the mind of God. If they question the seasons, we can always say you’re divinely inspired. Or that all prophets have been known to be wrong. Now, off you go. Good luck!

Perhaps The Prophet will bring everlasting nocturnal life! “The devil will be with you in a moment,” as the hunchback in The Tin Drum said in the lavatory.

[The Sun obtains her peculiar power, not from her light and energy, but from her regularity, from the nutrients of night and day and the cycle of the seasons. We may no longer worship her, but we still experience her movement, just as we continue to think of time as clockwise. Convention records her annual passage through the Zodiac, as though country in the night sky were not more appropriate indication of our progress on this planet. Even her regularity is a projection, revealed to inquiry as deriving from the momentum of our tilted fall. It is Earth which deserves our reverence, and yet, like some atavistic matriarch, and like our own outgrown parents, the Sun still pulls strings in our unconscious. Exegesis I, i.] 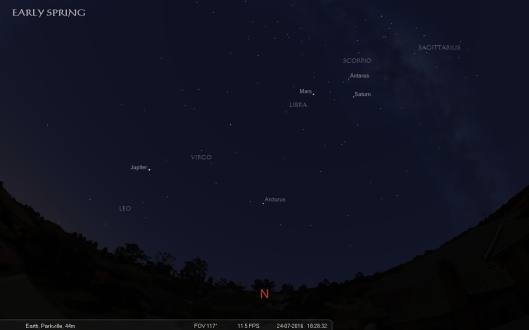 Representing Metatron as one of the archangels who transit at nightfall to shepherd our local seasons, expansive Arcturus is distributing blueprints for renewed growth. True Spring is the portfolio of Antares (Uriel) in a month.

I await clarification from the Victorian Government on the propriety of linking my observations with Aboriginal cultural heritage. My source of information on local seasons can be found here.

The identification of six seasons by the Wurundjeri people is sufficient reason to abandon the geometry of northern hemisphere astrology, and attach the signs in southern order to the constellations, not according to distance from the (northern hemisphere) Vernal Equinox. The appealing symmetry of quaternaries, elements and gender, magnetic or mathematical polarity cuts no ice down here, where we are belatedly learning to go outside, look up, and make up our own mind.