A long time ago now, having more by good luck than good management evaded capture by the Germans, or betrayal by collaborators, five abandoned British soldiers found their way by the light of a full moon to the port of Le Verdon, where they were taken on board a Polish ship and evacuated from German-occupied France. Actually, only four made it to the ship. The lieutenant who went missing was a lunatic, the expatriate veteran who shot him from behind confided to me in drunken anguish one Anzac Day in Prahran. My stepfather was a decorated officer of the Black Watch, and his reaction was guarded when he heard this story. He still had nightmares about leading the liberation of an extermination camp at the end of the war, my mother told me. 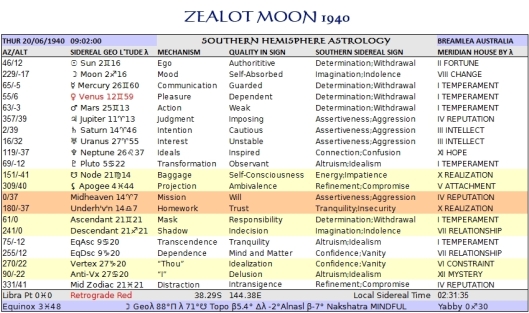 Exactly 76 years ago, 4 multiples of 19, the Full Moon of June 1940 was within a degree of this year’s, therefore in the same Nakshatra, and very close to the Sagittarius solstice point, like this one. Reading accounts of the conflicts which my parents’ generation grew up in is every bit as challenging as confronting my implication in the treatment of indigenous people here and in Papua, and my share of responsibility for the suffering of millions in the Middle East. I am ashamed to be embedded in this violence, as most of my generation are who have been passengers on what we have believed to be a journey to reconciliation. Can astrology have anything to say on the subject?

There wasn’t much sign of reconciliation in 1959, when my generation were still in school: the Solstice Moon shone on a respectable world in which insecurity resolved itself by proxy: shorthand for thousands of violent deaths in Central America, Vietnam and the ‘colonies’ of Africa; and for the indoctrination which validated the massive spending on nuclear proliferation which accompanied the Cold War; not to mention the evasion of the law constituted by contemporary closed-shop methods of dealing with sexual abuse of children. Dictatorship and military-style leadership seemed the norm, on the international stage, in workplaces and families. [1959.]

Everyone was a zealot by 1978: Aboriginal land rights occupied centre-stage in Australia, but two decades of self-actualization had resulted in substantial progress for the equality of women and the secularization of morality. Economic reform was underway in both USSR and China which would transform the world. However, there were signs of trouble ahead, in the emergent form of ‘political correctness‘. [1978.] Then came 1997, which I look back to as the high tide of multiculturalism, but the Australian ‘history wars‘ of that period were a disturbing crack in the foundations of a belief that we are one humanity undivided, indeed enhanced, by difference. Zealots were emerging on the extreme left as well as the extreme right. [1997.]

And so the punctuation of the Moon’s orbit, the foundation of archaeoastronomy and arguably at the root of earthly civilization, science and technology, returns it to the solstice this month. How are we looking? Do we go around and around like the Moon, or are we getting somewhere? Is there still a ‘silent majority’ of good people armed with regard for each other’s welfare and fulfilment? Does it have a resilient discourse to steer us more or less unanimously towards a decent solution to the humanitarian crises we must face, of violent political upheaval and mass-migration, despite the clamour of zealots at both extremes? Can it direct the resurgence of religious difference towards the enhancement of secular, multicultural cohesion? 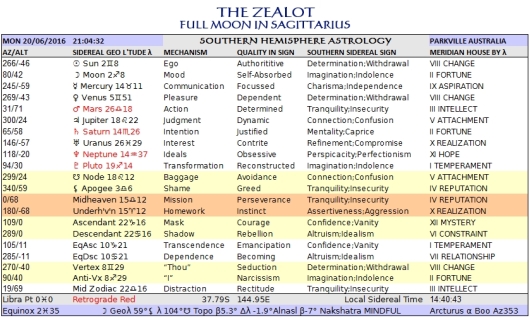 The Full Moon this month as you can see is half an arc-minute from the solstice of the Tropic of Cancer, so it is more than valid to look at it from a southern astrological perspective. The one-half of the world’s population who live below the Tropic of Cancer are looking north to see the Moon, so it appears 104 degrees past the descending node! Most of you will go, “Huh?”, but in the interests of the ‘silent majority’ I would like to remind you that Southern Hemisphere Astrology evolved as a rejection of colonialism! Our perspective ‘down’ here is as relevant as yours ‘up’ there, and perhaps the polarities of astrology can resonate with the ‘silent majority’ after all. 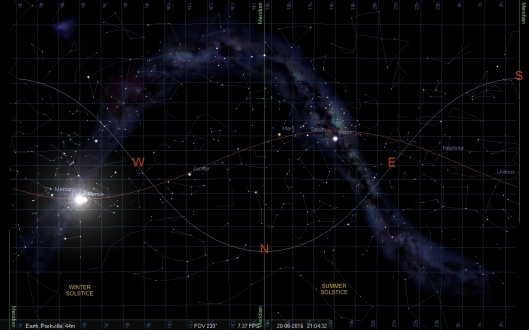 Out of respect for our northern cousins, i.e. those living north of 23.44 degrees north latitude, I present the view from the ‘Mirror’ just off the east coast of Japan, the same distance ‘above’ the equator as Melbourne is ‘below’ it, and at the same longitude. Let me remind all readers that you can always see the opposite hemisphere’s point of view if you turn to the cardinal point opposite the Medium Coeli, cusp of the Fourth House, and crane your neck backwards far enough! 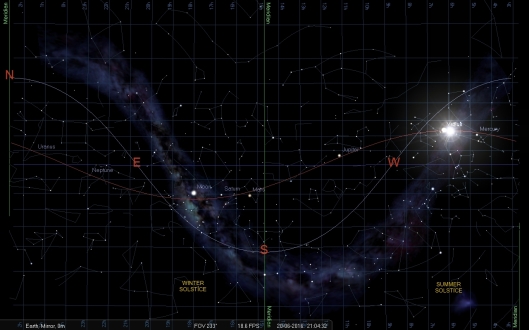 What you will read in astrology columns will almost exclusively relate to this image, in terms similar to these: 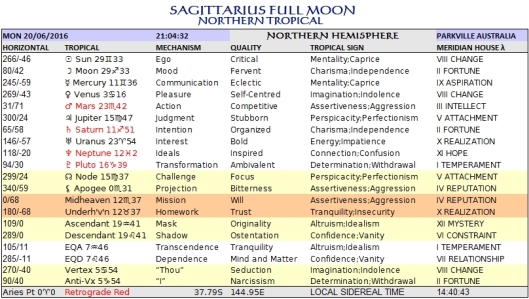 Needless to say, it is wrong for half the world’s population. That’s OK: it’s right for the other half. Or is it? Perhaps each is wrong. Is the Moon as an entity above or below the Ecliptic? Both, or neither? Do we need to respect the Other’s truth more, or ours less? Remember, “Beauty is in the eye of the beholder.” Whichever way you look at it, the Sun in Gemini is making up its mind, and the Moon in Sagittarius is making up its heart. Perhaps therein lies the reason the egg the Emu lays every nineteen years never hatches, bleached by the Sun. You may take our word for it. [There is an alternative periodicity of Full Moons at the June solstice, eight years after this series, visible at night somewhere in the southern hemisphere, in Australia in 1948 and 2043. The Moon is above the Ecliptic. As far as I’m aware, the bird, ostrich, cormorant, or vulture perhaps, has not been identified.] 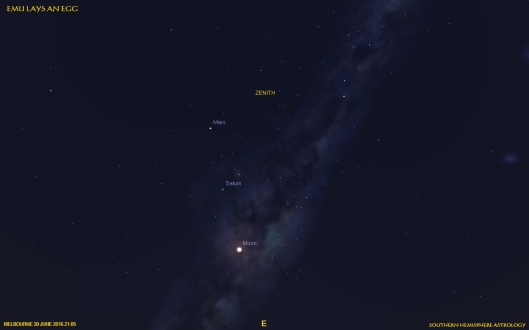 This time around, the egg that won’t hatch is internalized phobia and, dare I say, self-love dependent on the removal of offence. Not as though this may apply to you, here is a cautionary quote with an interesting link for those susceptible to reintardation, prey to compartmentalization, or with a tendency to project shame onto other people: “To attempt the destruction of our passions is the height of folly. What a noble aim is that of the zealot who tortures himself like a madman in order to desire nothing, feel nothing, and who, if he succeeded, would end up a complete monster!” Denis Diderot.

Astrology should be recognized as a poetry of the cosmos. A moment in time depicted by a horoscope enters the physical world through the portal of the discriminating intellect, and claims to represent reality; but its signs should not deny their transcendental origin. A poem must similarly be a thing, but its words should seduce the mind back into itself, and connect with the poet’s construction upstream of imagery, upstream of thought, where the creature lives. Astrology situates me there, upstream of any word in this chart, and yet pulsating with every one, at daybreak on Sunday, the day of the New Moon: 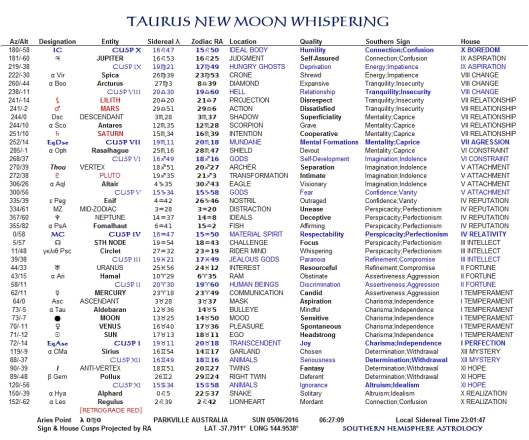 The whispering of the Circlet of Pisces comes from the lost domain of who I might be if I weren’t so busy being who I am; and who am I, the thinker or the thought, the intention or the affect, the affliction or the addiction? Always both, and neither. Mindfulness, compassion, equanimity and gratitude are the way, but I often take another fork. Whispers give me the clue. They signal the emptiness of who I am. It often seems to me that life could be simpler if we were less focussed on outcomes and identity, and more on the emptiness of the processes of life, the miracle of being alive to the whisper of mortality.

I read an article about the expansion of the universe, in which Paul Sutter asks, “Where’s the edge of the universe?” Everywhere is the centre of expansion, which makes me ask, how does this apply to the human mind? Does my thinking situate me in an expanding human consciousness which might include all people and endure forever, or is the process by which my discriminating mind interprets perception an expanding emptiness in which I am forever unborn? Is there an acceleration to the former? I don’t think so, but perhaps there is an increasing urgency in the battle of ideas. Does that urgency have a common root with my expanding emptiness, the immanence of death? Everyone agrees that everything is connected to everything else, but how is it so, inside out, or outside in? Is the thinking you do the same as the thought you communicate to me? Are how things used to be connected to how they are today if nobody remembers how they were? Thinking and systems of thought are two different things.

The increasingly well-known dichotomy of thinking with the head and thinking with the heart can be addressed by this metaphor of expansion. Thinking with the head engages a person in connecting an experience with categories and systems of thought; thinking with the heart searches for meaning in the opposite direction, towards the empty self. Ideas continuously occur, but if they can’t be put into words that convey them to ideology they go immediately to where all mysteriously disappeared communications go. They cannot cohere; they do not live. Limbo could be the name of that place: an expanding universe of emptiness which exists in each of us. The spirit is emptiness, expanding in the same way as the material universe, but inwards. Is the heart in the right place when it imposes itself? The question, ‘Who am I?’ can and should be rephrased: ‘Where is the far edge of emptiness?’ Is it the horizon? Is it death? Is it cultural or evolutionary selection? Is it otherness? The Word of God? 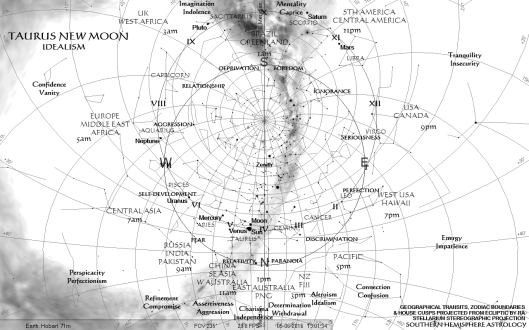 Idealism is commonly regarded as what underlies an effort or a life dedicated to improving the world, advancing it some way towards an impossible perfection. As a philosophy, it represents the belief that what exists outside the mind can only be known by what is inside it, but the fundamental conviction of idealists is that what is inside their mind is real. Idealists have no doubt: the world is a misunderstanding of what is good for it. Lifelong dedication and the use of any means, ‘tough love’ and even violent confrontation, are justified to change the rules which make the world coherent. 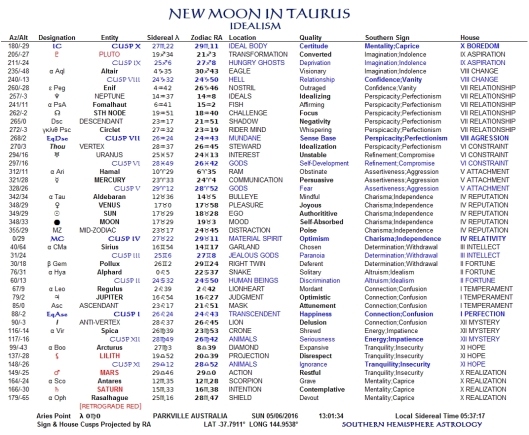 Uncomfortable acquaintances though you might expect them to be, in fact they enjoy prestige. Despite apparent negativity, their undoubted attunement, optimistic moral certitude and assertive attachment-style lend them charisma. It can be difficult to resist their confidence in getting their own way. It can also be difficult to shine a mirror on their inner certainty. If they are ’tilting at windmills’, perhaps they do see something I don’t. The game couldn’t be played without rules, could it, or could there simply be play?

Thought is a great sea wall you see as a youngster and marvel at how humans put such huge boulders in place. But as you become more conscious of the ocean hurling itself against that wall, as you get older and realize that the ocean is inside you, that it is the unspoken and the unborn, you find that it is the wall which is doing the crashing.