And now the sotereological narrative of the Easter Passion again reaches its denouement. Millions are experiencing the cleansing of their sin by the awful suffering of the Divine made flesh, but billions are not, who think they have known suffering or are suffering now, without admission of the power of nameless love into the shrine of their wound.

We stand at the Fifteenth Station, or the First.

Do not believe what you’re told by the high priests of astrology, or any other rule. Feel it!

And the moment by Stellarium to make two things clear: 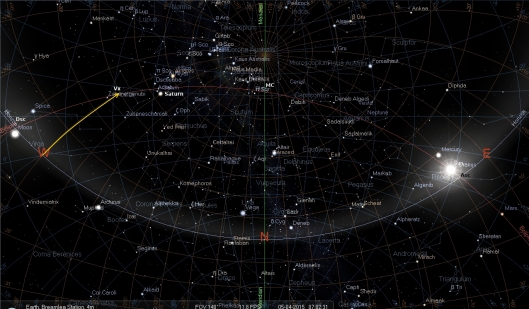 what the Vertex actually ‘is’, and that astrological positions are geocentric, whereas Moonrise and Moonset times depend on the local conditions of observer angle to the Moon, its distance, and the refraction of light at the horizon, or in other words, topocentric position as shown here (in answer to the question, how can Moon position in the chart above be east of the Descendant, when it sets west of it?).