When Jesus of Nazareth was dying on the Cross, three stars were behind his head. The one in the middle promised him transfiguration in the Godhead, while the two on either side of it beckoned him to the Left-Hand and Right-Hand Paths. Sinistra offered him transcendence, celebrity and world rulership. Destra offered him only the emptiness of his suffering. I do not know which he chose, if any, but those three stars are for me an indispensable accessory to the Cross in the southern sky. Which would you choose?

Tomorrow morning’s transit of Sinistra will have a new resonance.

Venus is passing through the gate Sinistra forms with its ambiguous opposite, Alpheratz, the one who says, “Hey, make of me what you will!” Something is bothering Venus. Before she catches up with Mars, she will remember unfinished business behind her. I think  she is in two minds whether to go back at this moment, but slow processor in Pisces, she won’t turn back for a few weeks.

She retraces her steps to the infamous Circlet of Pisces. 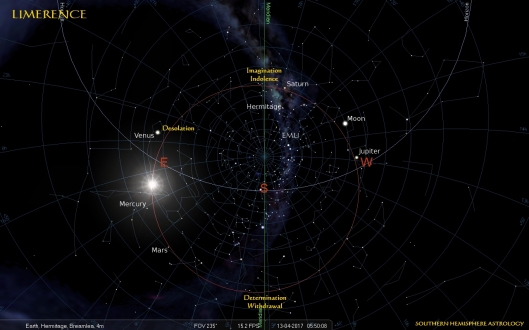 No, she did not leave her glass slipper at the ball! But perhaps she did leave a handsome prince. She pokes her head in the door, but the cavernous hall is empty. A great love which may have promised to enshrine the heart in myth echoes its delusion.

Back she turns on that day, towards another ambivalence, the Héloïse who lurks in every Abélard. 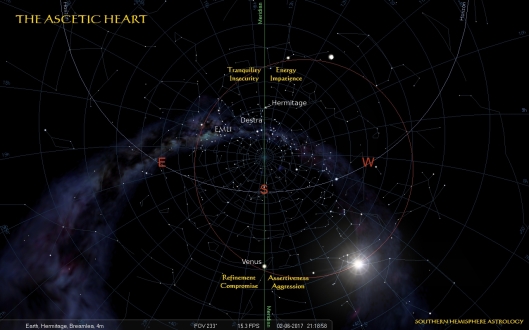 So much more interesting than a story about a retrograde planet, don’t you agree?