The Southern Cross and the Galactic North Pole transit around midnight in early April, and naturally the Virgo Full Moon–the first full moon after the Southern Hemisphere Autumn Equinox, and normally, but not always, the Easter Moon–also transits around midnight, so let us have a close look at this intriguing coincidence of the Southern sky, or one astrological representation of it anyway. I am truly sorry that our society has polluted the night sky so irresponsibly that some of the elements of this representation have been expunged from your view. You must use your imagination. That’s life. 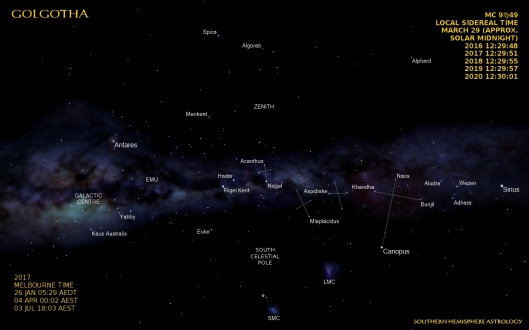 If the navigators who charted Crux in the 16th Century had not been Christian, it might have come to me with another name, Possum (Boorong) or Stingray (Yolgnu), for example, but it is as the Southern Cross that it is prominent in the national flags and consciousness of vast numbers of Southern Hemisphere people. Consequently, the popular names for the asterisms featuring Miaplacidus and Aspidiske have followed the Crux convention: the Diamond Cross and False Cross respectively. (That featuring Canopus is my afterthought, putting in perspective the way of all human flesh.) 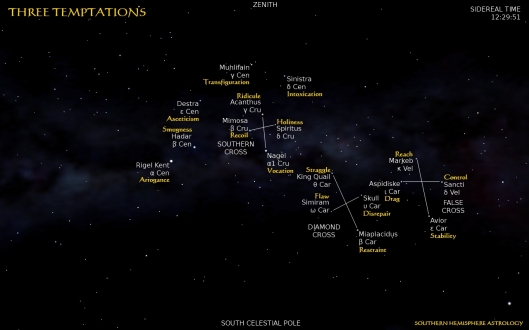 The temptations besetting the Child of Humanity on the cross of our finitude are the bright stars above left, centre and right of our head as we look down on our axis. The attributes of the stars in this representation are a meld of their physical characteristics, their resonance with each other and the significance of their position in constellation and asterism. As might be expected, I emphatically reject non-names like Acrux and Gacrux given by northerners who can’t even see this far south. It is anathema to me that we usurpers of Aboriginal country seldom have a personal relationship with the sky they lived in and we took from them. Go out and name your own stars. Create your own mythology, before you lose the night sky completely! 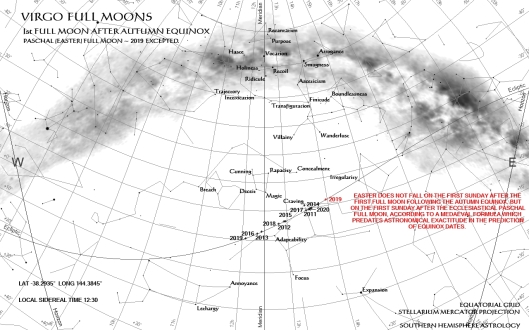 My symbolism admittedly reflects my Judaeo-Christian cultural heritage, but I believe it has universal significance. When I was a boy, the Easter rituals of resurrection and regeneration seemed to me to lack the symbolic force of Northern Hemisphere Spring, but the fortuitous configuration of the Southern Hemisphere Easter sky, to my knowledge amazingly unnoticed by my Christian teachers or previous generations, is nothing short of miraculous! Pause to reflect on these facts: the Northern Hemisphere Spring Equinox has been in Pisces for the entire Christian era, and the next Full Moon has appeared in the Virgin (as seen in the sky) for about half of that period, but the Southern Cross is not visible in ‘Asia Minor’, the birthplace of the Cross as symbol of resurrection, and the alignment of transiting Virgo with the high arc of the Milky Way bridging east and west is also not visible there. The symbolism is potent only in the South. It can be our Easter myth: the cosmic placement in our lifetime of an Easter cross–in ‘fact’ the several crosses of historical Golgotha–at the equinoxes linking North and South, law and life, structure and becoming, and as the primeval keystone of a bridge linking East and West, personal and social, the authentic rights and obligations of our own ‘country’.

The first temptation in the path of authentic humanity is to get ‘out of it’. 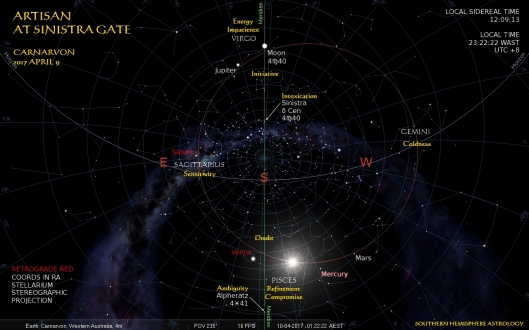 The second is to be someone else. 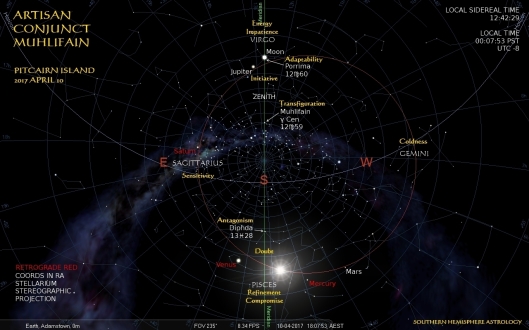 And the third is to be perfect. 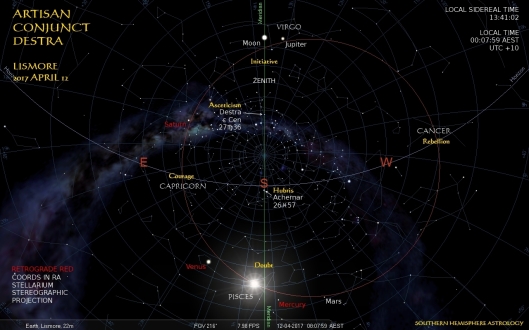 In my vision, the Southern Cross stands at the confluence of two rivers of the Underworld, the River of Woe, Acheron, and the River of Forgetting, Lethe. The Southern Cross and the head of the Emu mark where the River of Hatred, Styx, flows from view, as his wife and child disappeared from the view of the crucified Spartacus in the 1960 movie by Stanley Kubrick. This is the river on whose bank Orpheus mourned the loss of his Eurydice, and whose waters bound the oaths of the gods and made Achilles immortal, except for his Achilles heel. In the contemplation of the invisible spirit of the physical world, our eternal absence in death, and the devastation created by unrestrained emotion, we have three Achilles heels. 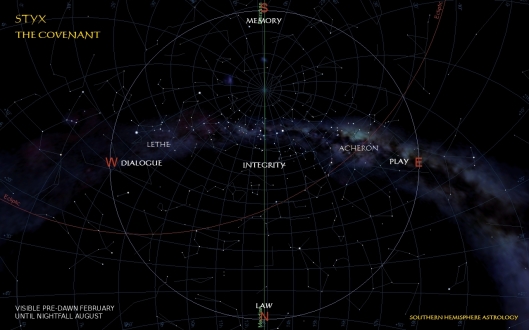 I do not believe that the physical Moon will pass by these stars as through force-fields, any more than I believe the psycho-social effects of its gravity can be particularized and quantified, but as Easter approaches, I will be reflecting on the pitfalls of the authentic life they symbolize, and I suggest you do too. Integrity, not identity, is the way, and the serious business of being, the only meaningful task you will relinquish in death, consists of embodying the symmetry of apparent opposites. Your ‘country’ is the meaning you give your sky. As Robert Dies would say, “Happy lathering, customers!”