This is a transcript of the Country Talk program originally broadcast at 8 pm on Saturday 31 March 2018, presented by Joe Blow.

[Joe Blow:] Aboriginal evangelist Roundaway Camooweal has died in hospital overnight from head injuries sustained while attempting to intercede in a violent confrontation outside Trades Hall between members of the Bricklayers and Tilers Union and the Robotics Assembly and Maintenance Guild.

Mourners gathered outside Northcote Town Hall this evening thronging across High St with placards proclaiming “Emptiness Is Saved” and “Country Is Sovereign”, while inside, the Country Artisanry Awards presentation goes ahead as scheduled, following a Welcome to Country delivered by Witchetty Grub people from the Wurundjeri Land Council. In the absence of the patron of the awards, Aboriginal Petrichor Cokehurt, Professor of Comparative Astrology at Quinoa Curtain University, will conduct proceedings.

[Prof. Cokehurt:] It is gratifying to see so many people here in the aftermath of the horrific confrontation at Trades Hall yesterday, and I hope that this event may be repeated for so long as we hold Roundaway’s memory in our hearts. Tomorrow is Easter, I wish it were more widely known just how complicated that word is, but let us not conflate our tragic loss with archaic symbolism. Shall we simply look forward to the joy of watching little ones hunt for Easter eggs, keeping our thoughts about the true meaning of death and salvation to ourselves, as we have learned to internalise the seasonal contradictions Down Under of our imported ritual of springtime renewal?

Our patron initiated this celebration of artisanry which most emphatically reveals itself as a tradition voicing its own resurrection. The background of his project is not hard to grasp, although in this age of environmental alertness it can be hard to imagine the un-attuned culture our patron grew up in, saturated with personalities so separate from nature that death presented an annihilation disturbing enough to necessitate the advent of a messiah.

Roundaway was raised under the authoritarian guidance of magi who supervised the amputation of his intuition: forced to wear dresses to school, to learn to write with his left hand, and to speak in a language which few at school could understand and was too archaic to express any of the elements of his experience, he was routinely sequestered among elders who were mentally ill. While the girls in the street were able to communicate in a fashion by kicking balls around, the boys faced a constant struggle with indecipherable antagonism. The intimate caress of a magus was almost a relief.

Defined by the magi as a Capricorn, he suppressed his Sagittarian imagination as a tendency towards depression and a hindrance to ambition. He was initiated into what the magi called his true nature by some very gloomy people. He learned to mask himself as a philosopher and poet, even as he worked long hours as a delivery boy. Eventually his inner life was possessed by a priapic god, and the dysfunction of his early adulthood encompassed a search for meaning in the disposition of the body, an attempt to integrate Arthur Lingam and Martha Yoni.

And then he received his vision. Simply walking down a city street one day, still more or less a delivery boy, but now a clerk of courts in a suit, he was suddenly aware not only of images and objects as empty processes, but of the essential nature of images and objects as ingredients in empty relationships. God had taken off his dress, the illusion of form had taken shape, and passers-by were all walking backwards in time, upside down.

He stopped going to magus meetings, and his life fell apart, time and again. Other people couldn’t hold it together for long, try as they might to save their image of his Capricornia. One day he left his dilapidated land rover to wander in the bush and fell into a cave, from which he was rescued a month later, skin and bone and raving about self as the emptiness of country, and three principles: sovereignty as perpetual struggle with language; cruelty and suffering as the faces of boredom; and the sky as real from bottom up.

Many here tonight have heard his description of that experience, how the mouth of the cave yawned below him like the maw of a monstrous future, a fateful harvest of consequence coming at him like a freight train, and how wandering in the bowels of the earth led him to discover that people are all artisans, their identities created by the utility of what they fashion in obedience to the imperative of their craft, just like the processes of geology.

And so to our winners, the inhabitants of this sublime synchronicity, and with them the builders, architects, engineers and surveyors who helped put it in exactly the right place. Very nearly a perfect creation, but not quite. Should the residents care to observe the precisely full Moon due north in their location, they will be mesmerized by the arc of the Milky Way stretching miraculously from east to west, and let no astronomer or surveyor awake in the vicinity quibble about precision. Indeed, not only is no creation perfect, but no one creator is ever responsible. Add those who made it exactly the right time and place: the Moon, the Earth, its tilt, oceans and shores, the Sun and all the other stars. They all belong to our guild.

The runner-up is the precise moment of the transit of the galactic poles. The Moon and due north are too close to call: who knows where north is in the dark? 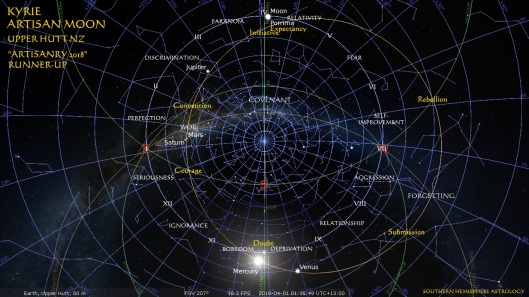 And at Uluru, who knows the precise moment of full Moon? It looks full all night, and there’s no doubt that the Moon is transiting in the same instant as the Galactic Poles! And what more fitting place for the Moon to highlight the Covenant of Crux at Easter to the awesome strains of the Kyrie! In a sense, Uluru fashioned itself through geological processes for this very event.

The girls in the packing room don’t miss much! Their award goes to a very distinguished entry indeed. Its depiction of the Moon’s conjunction with Porrima balances the confluences of the Zodiac and the Rivers of Hades on Christianity’s horizon at the stroke of its Easter Moon, thoroughly deserving the packing room accolade. Woe can be an occasion of defeat, but it can also ground us, in faith, in compassion. Forgetting can salve suffering, but moving on can condemn us to shame. Angles can anchor the projection of a map, but only as sovereign in a particular place at a particular time. It is not possible to formulate the combined experience of people on opposite sides of the Earth, walking with their feet pointing at each other, minds full of signs sticking out like pins into the cosmos.

In the beginning was the word, and the word was ‘good’. Any parent who has sought an impression of their child’s day at school has grappled with the contentious primeval meaning of that first word. Whether you believe that Jesus was the son of God or not, civilisation is a creation of gods, as surely as a work of art is its own creation, and neither one is an end product of a cumulative evolution of rules. Corruption is the fruit on the tree of law. Only creation, the inhabitation of human hearts by the meaning of the word, has saved us until now. Both the victim and the possibility of routine evil which victimises exist in the realm abandoned by gods as surely as the coward punch that killed the patron was inhabited by the god of silence and perimeters, a totem of nihilism.

Here is the last work we want to show you, from the patron’s bottom drawer. A sign is coming on Tuesday, an alignment of bodies, matrices and angles which signifies a living breathing inhabitation of country by a dead man. What does it mean that the conjunction of Mars and Saturn occurs every two years? Clockwise in the South through the constellations, signs and houses? I don’t know. Do you? A punctuation mark in separated, meaningless lives, or something else?

I do know that Roundaway hoped to live until the triple conjunction with Mercury in the Constellation of Pisces in 2026. Will that event be authored by his desire? What does it mean that today’s ten-year-olds will see it when they’re eighteen?

[Joe Blow:] So there you have it: sovereignty or narcissism, polarities or contradictions, emptiness or meaninglessness, conscience or chaos? Thank you for listening. This is Joe Blow, signing off from Northcote Town Hall. Now it’s time for us all to don Easter Bunny costumes. But remember, it’s Autumn: no smiling until tomorrow.