“If we knew what it was we were doing, it would not be called research, would it?”
– Albert Einstein.

What makes you tick? Not what motivates you, but how do you put yourself together? What is your organizing principle? Not why you get up when you’ve been knocked down, but how? What do you call to mind? What comes? Is it a lie to foster a self affecting a truth? Why is it that accepting the inevitable seems like a self-defeating mechanism? When an imperative pops into your mind, an innate or habitual mechanism, do you recognize and give expression to the body of your world, implement it as the construction of your will, or fight it as the enemy of your integrity?

If we could imagine for a moment language inflected not only with sexist and racist attitudes to power, but also with ingrained certainties of the physical world, including which side of the human body belongs to us and which to society, the sacredness or profanity of the instinct, and the nature of freedom as submission or rebellion, then to the extent we are comfortable and decipherable using our language, we might be confident of a universal order which makes us all brothers and sisters. We could understand the ego as the instrument of our own control over the irrational and infantile.

On the other hand, should the ego seem more like an enemy than a friend, should meditation waft us away into the universal mind, leaving us with the body only of our breath, we might attempt to dissolve our infantile defences against separation, disappointment and death in the acceptance of change, but succeed in arresting the change the universe orchestrates by flowing through our bodies.

And what if the body of the world, our habits, language and culture, seems to us in itself a threat to our identity, an oppression of our egoic insistence on mastering the socially constructed self to become in a state of fluidity whomever we choose intellectually to be? If ‘identity’ has ceased to mean what is identical, but “A person’s conception and expression of individuality or group affiliation, self-concept and self-representation”, where are those brothers and sisters now? Compassion and loving-kindness limited to the emptiness of a meditative trance? Equality, democracy and equanimity are subsumed by ungovernability when ‘identity’ is forced to mean ‘ipseity’ and the universal mind devolves into tribalism. 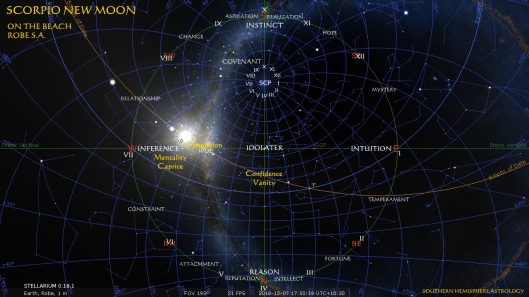 Many hundreds of thousands of years ago, our ancestors began to make sense of the movement of the Moon. It became hardwired into our understanding of time. It made scientists of us. Actually, you could say that the Moon, by impressing on us the rhythms of the sky, was waiting for a first landing, and caused those enduring footprints itself. Perhaps the real cause was embedded not in American politics, or an intercontinental military-industrial complex, but the universe itself, the how, not the why. 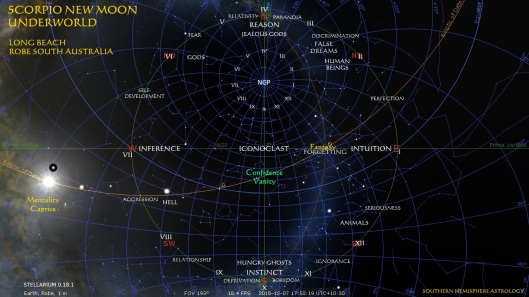 At a certain distance from the Equator, currently 37°9’34” latitude north and south, decreasing at a rate of about half a kilometre a year, the points at which the Galactic Plane and the Ecliptic intersect are either due east or west at the precise moment the Milky Way intersects with the horizon north and south, arcing east or west. Does this mean anything? Do you doubt it? How can you betray your ancestors by doing so? In fact, it means to the body of the world that someone has noticed it, and nothing more. Climate change is a similar, not to say identical, phenomenon. That someone did not say that east and west and the planes of the solar system and the Milky Way exist only in the mind, that the azimuths of the Galactic Poles are a problem of elementary trigonometry, or that the language used to formulate astrometry needs to be decontaminated before its importance in human history can be debated, as though it were a matter of whose bodily processes in an interstellar spacecraft have precedence, officers or ratings, men or women, black, brown or white, means only that reality has made a new appearance, that someone noticed something happening, as though in the mirror, in his Underworld.

The Sun crosses the Galactic Plane slightly less than seven hours after Solstice this year. If you’re within cooee of the N.S.W. Central Coast on Solstice Day, a Saturday, why don’t you see what you’re made of? It’s a special moment, any time the Sun is due west, this one fitting for a special companion. 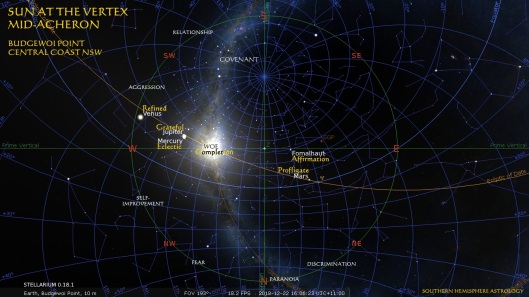 What do you find beneath your feet? Does Mother Earth recognize them? Do they mirror those of an observer of the Moon on the other side? Is fantasy or forgetting an element of how you deal with things, or both, and is (s)he the One? Remember, do not to leave your phone in the car. 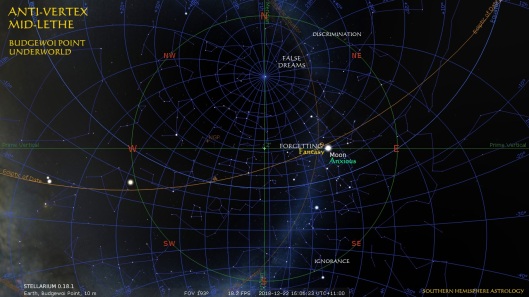 One day, astrology may use what has been noticed to see something else. Then it will be understood, but first it must be seen. Its seeing is in turn the underlying understanding of doubt. Climate change may be the universe engineering the colonisation of other solar systems by whiteness. The wound may constitute the measure of breath, and the oppression of victims be the cinching of trousers around the neck of believers. Belief, when all said and done, is of the body, not the mind. And should you doubt December’s opportunity to doubt doubt, perhaps you have not known hope or grief. When you do, in your body, please know that I, your ancestors and the birds, along with a dog and cat or two, hope and grieve with you. We are the universe. But doubt, you can have that on your own, with the sky revolving north and south, unseen, for when doubt rounds on the Self, only Christmas can save us, hein? And the ancestors sing, Death, D-Death Death, where is thy sting?