“Anxiety is the first experience of our freedom, as a freedom from things and other people. It is a freedom to begin to become myself. Anxiety is perhaps the philosophical mood par excellence, it is the experience of detachment from things and from others where I can begin to think freely for myself. Yet, as Heidegger was very well aware, anxiety is also a mood that is powerfully analysed in the Christian tradition, from Augustine to Kierkegaard, where it describes the self’s effort to turn itself, to undergo a kind of conversion. Heidegger’s difference with Christianity is that the self’s conversion is not undergone with reference to God, but only in relation to death….” Simon Critchley.

Astrology’s conversion is undergone by gender and the mind/body duality with reference to the Antipodes, (complete with continents of obscuring cloud), where planets are in opposite signs and houses, but the houses carry the same signs.

Bordertown in South Australia is in fact some 17 km from the Victorian border as the crow flies, but it is perfectly named as a location demonstrating another border, between the adaptive attitudes and habits of consciousness and the reactive, instinctive moods of the body’s interpretation of its existence in the world, which together form identity, the emptiness of Country. At the stroke of New Moon, the Signs and angles of Bordertown’s Underworld are in perfect harmony with the hours across the border in the Northern Hemisphere, and Death speaks with its customary ambivalence. 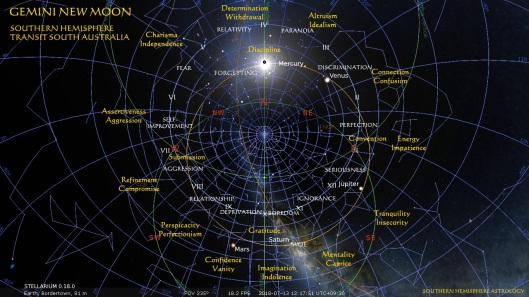 It is in response to the awareness of finitude that we show ourselves who we are. There are many ways our body can seduce us into evasion of this awareness, by consoling us with belonging to something timeless, eternal salvation in religious and secular ways. Are we making the world a better place? Are we following the rules which screen entry to Heaven? Does anything really matter? Is not pleasure an end in itself? These are some of the voices which call us to forget the anxiety of the anticipation of annihilation. These are some of the roadmaps we overlay on country to separate ourselves from it, and to make it traversable.

Bordertown tells us, on the other hand, that whether we are emerging from the waters of Lethe into an interlude of imaginative indolence or determined withdrawal, instinct is locating the necessity to identify gratitude as the harmonious well of our calling. This world is not a thing, it is me! I made it; I am made of it. It is not a departure point to another one. The future is no different from the past: both have no existence other than right here, in me, in the only world there is, mine, lived with you.

Ah, relationship. “We are lovers, that is a fact” (Bowie). In a social reality dominated by discrimination, judgement and projection, relationship is in theory a connectedness which overcomes meaninglessness and loneliness, but in practice it reveals more than we want to know, engaging identity in constant trench-warfare against misunderstanding. Just who is the person your lovers and friends are in relationship with? Is your Shadow your shit or theirs, and whose, if theirs? 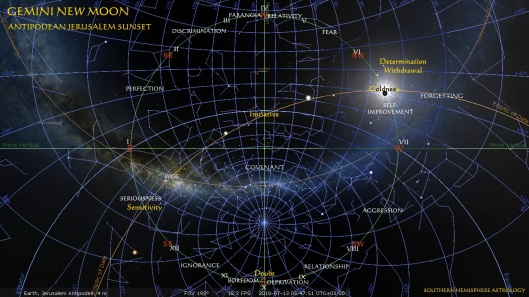 Somewhere out of mind in the South Pacific, the invisible Underworld sky of the spiritual home of the Abrahamic religions affirms what most martyrs still breathing acquire, the spiritual materialism of immortality; but with a decided lean by nightfall, the idea of a covenant, like the heritage churches of rural Australia, which are struggling to stay standing, let alone provide financial compensation to victims of historical clerical sexual abuse, has passed its use-by date this year as a source of meaning, if we ever had the imagination to make it one in these secular postmodern times.

At dawn up at home, however, it is the vain queen Cassiopeia who is faded from the sky, her chair lodged in the branches of the elm at the entrance to Hades, like the morning-after evidence of a rowdy party. The Jerusalem Signs, identically mirrored in its autonomous underworld body, bode ill for the likelihood of a resolution of sectarian conflict coming from mutual understanding and respect. What really happened seems as elusive as what is really happening, in this cloakroom of multiple tickets for the same baggage.

Yes, it is relationship which tears our world apart. The British vote for their right to autonomy, but baulk at complete separation. The Americans bring the World Order crashing down around our ears, but our protests contain no inkling of faith in the World Order’s capability to develop solutions to the unemployment of children and grandchildren ejected from automated workplaces and failed states. The reallocation of Australian aid to Palestine through the United Nations provokes a reaction revealing political Islam’s belief in spitting on people. The endorsement of same-sex marriage in Australia precipitates debate about religious freedom, to which the Social Services Minister adds the insight, “We have not realised Martin Luther King’s dream of a society where you are judged by the content of your character, not the colour of your skin. Instead we have woken up to a nightmare where the value of your contribution to a debate depends on what you claim to be a victim of.”

But peppering the news on all these fronts of our alarm come daily reports of irresponsible masculinity: murder, rape, assault and adolescent aggression and criminality. Before we have agreed on the evolutionary value of anger and aggression, it might well be geneticists who solve the problem by doing away with masculinity altogether, but in the meantime, what is it we are initiating our men into, global or local, community or game, grievance or responsibility? Undoubtedly, we need to equip ourselves with an authentic grasp of our own emotions, as the custodians of the world body into which our children insert their consciousness, and if we have no idea how the heroism of the Tham Luang cave was formed, perhaps an historical cultural practice of the Australian First Nations can nudge us in the right direction.

The Warrior Sky is the name I have given to the configuration of the Milky Way when it arcs in a straight line over our heads from southwest to northeast with its awesome centre, in the last degree of Breamlea Zodiac Scorpio (currently at tropical longitude 27Sgr6), near the zenith (Melbourne BZ longitude 23Sco11, tropical 20Sgr38). In this article, in Australian Archaeology, No. 77, Fuller, Hamacher and Norris (2013) present evidence of Aboriginal initiation sites being aligned with this configuration, as a result of its vertical presentation of the Emu. The opposite configuration which I have called the Wanderer Sky, extinguished by sunlight at this time of year, features the upright Emu rising vertically in the southeast, but its body is too close to the horizon in Australia to be seen. Is there a hidden message to non-Aboriginal initiates about gender and responsibility in the upside-down appearance of the Emu emblem in the southwest?

Perhaps, hidden in our bodily awareness, the physical impact of the world we interpret through the cultural lens imposed by generations of ancestors through our parents, there is an emptiness of meaning our sons can use to disarm anger, hostility and aggression. Perhaps the upside-downness of the Emu means nothing. 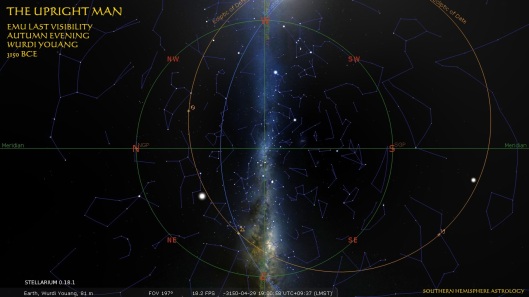 Boys, can you find the temporal emptiness of your bodily imperatives, your aggressive reactions to disappointment and disability, your intimidatory expression of frustration and anger, your malignant resentment of your displacement from the pedestal of worship? The essence of responsibility is to own the shit of others. Look to the Underworld, the Other Side. You will soon have a lot of time to do so.

Girls of the Northern Hemisphere, observe your animus downunder, and girls everywhere, in the bodies of boys, own your own shit.