There is no doubt in my mind that one of the great contributions to philosophy in the twentieth century was I and Thou, by Martin Buber. There is no ‘I’ existing in and by itself, Buber says, only an ‘I’ which stands in relation in either of two pairings: I-Thou and I-It (or I-He/She). The Vertex reminds me that my love-image, my attachment style and the success of my intimate relationships all hinge on my capacity to experience my self in relation, to recognize what I am projecting, and also to enjoy myself as a beloved.

Some totalitarian tweeted the other day his faith that same-sex marriage would be embraced by Australian society, and this would be a repudiation of the ‘concept of the other’. One of us is out of step, and it could be me. This is an ‘I-It’ attitude. Australia has embraced same-sex marriage, and this might be interpreted as the consolidation of an Australian identity, a swelling of the ranks of a majority who see eye-to-eye. It might also be interpreted as a recognition and celebration of difference, that we love, and share our ‘country’, our personal space, with the Other, as the ‘I’ in ‘I-Thou’. I for one realize that inclusion does not confer identity when it is an act of love, and exclusion and inequality do not imply enmity and ought not be used as weapons by totalitarians to inflame it.

Astrology does not have clean hands when it comes to the totalitarian claims of identity politics. Object-permanence may be an essential intuition in early childhood development and an important element in a sense of self, but experience should lead us to the understanding that only the past and other objects can carry our desire for fixed meanings. No person or thing can properly be understood as enduring in time or occupying unambiguous space. I cannot hate you for not understanding me, or sharing my culture and its beliefs. How could I, when I am not the same person two days in a row?

I have not worked on the Vertex to enshrine it in the pantheon of formative influences, but to connect my hormones to my concepts, to empty both of fixed definition, and to broaden the internal debate about what personality entails by enhancing my focus on what I and the Other may be projecting. I must admit, I am drawn to the ambiguity of its offence, and its compartmental categories of latitude are irresistibly mischievous.

The Anti-Vertex is the elephant in the room.

The Ecliptic is fixed on the equatorial grid, which makes it easy to predict and time its movement. The tropical location generating the chart above sees the Zodiac passing directly overhead and high and low in both hemispheres, and I am definitely envious of the spectacle. However, it is totally unempirical speculation on my part to relate the symbols of our deepest affections to the altitude of the Ecliptic. The worship, not to say the fetishization, of eternity and permanence could not be imagined as a localized phenomenon, could it? Would not such a suggestion be an invitation to outmoded concepts like the ‘noble savage’ and ‘the Other’?

This little corner of the USA could not possibly offer emotional or daemonic experience unavailable in the rest of the country! I am really more interested in the movement of that red line than in real estate values, but what if resistance to culturalist pieties found itself drawn to enclaves further and further from the pernicious influence of a Vertex of conformity, even as the pietist preachers of victimhood were succumbing to the transference of exotic love-objects from sub-tropical climes? 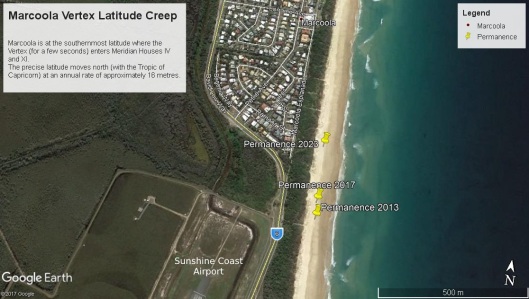 How would you react if around 2020 you started to become aware of strange new yearnings unsatisfied by good old-fashioned marriage, self-improvement and illicit sex? Instead of idealizing youth, you began to hanker after a winged angel on your marble sarcophagus? Or instead of people being turned away by your cynical intellectualized dismissal of spiritual life, they began in droves to revere you as a messenger from another dimension, taking holy orders and even their own lives to be with you in eternity?

Computing the exact latitude of date of the Vertex in the realm of Eternity demands seven decimal places, or 11 millimetres at the red line, to minimize its duration to less than 2 seconds, so if you’re right on it, stay put. Its rate of migration is 16,000 millimetres p.a. and its disconcerting wingbeats will pass over and be gone in 4 hours. Besides, the maximum sub-conscious reach of the Vertex for antipodean day-dreamers is the Gemini Winter Solstice (tropical Cancer), where it coincides with our Lethe Crossing and ‘Forgetting’ is the universe’s middle name. In the North, Eternity coincides with the Sagittarius (Capricorn) Solstice at the woeful heart of our galaxy, and you must continue to drown deprivation as is your winter wont.

The chart above locates the Vertex above Marcoola Beach, but in the very same moment (03:35 Eastern European Time) it is in the Fourth House above the Mortuary Temple of Ramesses III in Luxor, which is still forgetting at the Lethe an entry to the underworld 3,172 years later.

He was assassinated by a wife.

Roughly 4 hours later over Marcoola–woeful Luxor Eternity was roughly 8 hours ago: Eternity comes first–Permanence is a little more worrisome than Eternity, because of its tantalizing visibility, that is, it lurks in the House of Reputation, where consciousness is ever doing mortal combat with wokeness, and the next-door House of Attachment sublimates fear. Can you believe that enlightenment has been struggling with inherent properties for thousands of years, yet books purporting to contain the Word of God still top the bestseller list? Be mindful of the possibility that while you were deconstructing everything, your children were finding parasitism in the entrails of relativity and deprivation a most undesirable lifestyle. And note that in the Southern Hemisphere it is Cassiopeia, not Crux, in the First House. Don’t be surprised if your children convert to Islam because you’re just not permanent enough.