Those whom the gods would destroy find in their madness a subject for analysis.

He got into big trouble when it was discovered. It took many decades and generations of controllers fretting over the often irrational signals coming from the spacecraft before it was finally deduced that somehow limerence must have got on board. Only a virus like constant craving could explain so many perverse communications. Naturally, he was found to be the culprit, and was sentenced by the joint chiefs of staff of the supreme powers to pay retribution, which he will be obliged to pay, denied escape velocity, forever.

There were no doubt high-level sympathisers with the view, frequently expressed by common people, that elimination of limerence is unsustainable, and we must learn to live with it. However, to send limerence into the cosmos as representative of humanity was formally agreed to be unconscionable. It is ignoble, the communique emphasised, to wish for what one does not have. It is a betrayal of community to so devalue the expectations of others that one might excuse oneself from them and find in oneself a more alluring voice.

So long as the ‘Galactic Anticenter’ points to the ground, any but the most dispassionate astrological interpretations of the intersection of Prime Vertical and Ecliptic are to be suppressed, and the escape velocity in the Bardo from any variety of madness is to be defined as fifteen degrees per hour.

That is why First Crescent can be scientifically predicted, and no longer needs to be seen. That is why consciousness is measured by wakefulness. At least limerence, like the Golden Record the fingerprints of the ache of eternity, will be preserved as a human relic, as the tools of the first ancestors to venture out of Africa, in that first ineffable stir of limerence, have been preserved by the sands of the Nefud Desert.

You only lose what you cling to. That’s it! Nothing eternal here but cynicism, nothing permanent but idolatry. The Earth is full in Aquarius, disclosing what? Impatient perfectionism? Farewell.

“The ancient covenant is in pieces; man knows at last that he is alone in the universe’s unfeeling immensity, out of which he emerged only by chance. His destiny is nowhere spelled out, nor is his duty. The kingdom above or the darkness below: it is for him to choose.” Jacques Monod.

“Having the freedom to believe but not to express is not freedom at all.” Gabrielle Moore.

A grandparent’s life is about transforming eternity into permanence: preparing for death must be an act of love.

“What happened to you?” Disappointment is readily couched in blame, but the failure of the prodigal to live up to expectations cannot cloak one’s projected dismissal of annihilation, particularly narcissism’s claim to survival in eternity, and the open-ended immensity of non-existence known as permanence which so overwhelms the sociopath. Let us remember Janus, facing past and future at the gateway of our absence.

“Let me tell you what happened: this layabout took off when the going got tough, and excluded us from the temple of his emotions; and now his Procrustean flesh wants to come home, because it seems the capacity of its independence cannot surpass his father’s blessing.”

Not that this Moon would rationally be reflecting you personally, but ask yourself, was your existence worth its effect on global-warming, for example? Was it sufficient to be stable in your ignorant, irresponsible, surprised consumption of the self-evidence of every platitude, every fashion statement, every improvement to humanity and the planet, which you were manipulated by status into following … or not?

More to the point, if you are prodigal, is it in your wastage of the natural resources you inherited, or of the opportunity to share them with the poor of the world you choose to make your equals by calling them disadvantaged? How can you choose climate-change minimization over poverty alleviation? Fear? Shame? Millions have died in youth who, with the endowment of electricity, security and education, might have contributed far more to the science of energy technology, climate management and human survival than you and your lucky fathers, mothers, sons and daughters have achieved.

Have you lost your inheritance, the reason for your pain and all its hope, and in your contrition are you just begging your father for more than a slave’s wage? Take it then, the fatted calf of a world of hatred, fear and anger it is unlawful to express! Like the older brother in the parable of Jesus, I question your fitness at the table, especially where global temperatures and the manhandling of your waste are traded. Your eternity is emotional prattle and your permanence is rational wank, not flipping but tripping.

It is well-known that the Tropic of Capricorn passes through Longreach (and Gracemere, south of Rockhampton) in Queensland. Still quite commonly known is the fact that the inclination of the Equator to the Ecliptic is currently decreasing, and so the latitude of the Southern Solstice is moving northward. However, only our allegorical prodigal knows that in the year he was born, 1993, the Tropic of Capricorn passed over the Longreach hospital in which his long-suffering mother brought him into the world. A lifetime later, he is still pondering, as is his wont, if he was born before or after a Vertex Flip, if indeed there was one above his southerly ward, and why the stars wait for birth to exercise their influence. The miracle of gestation and the exhaustion of labour have never entered his equations of care. Thinking with the heart does not teach us to feel with the head. 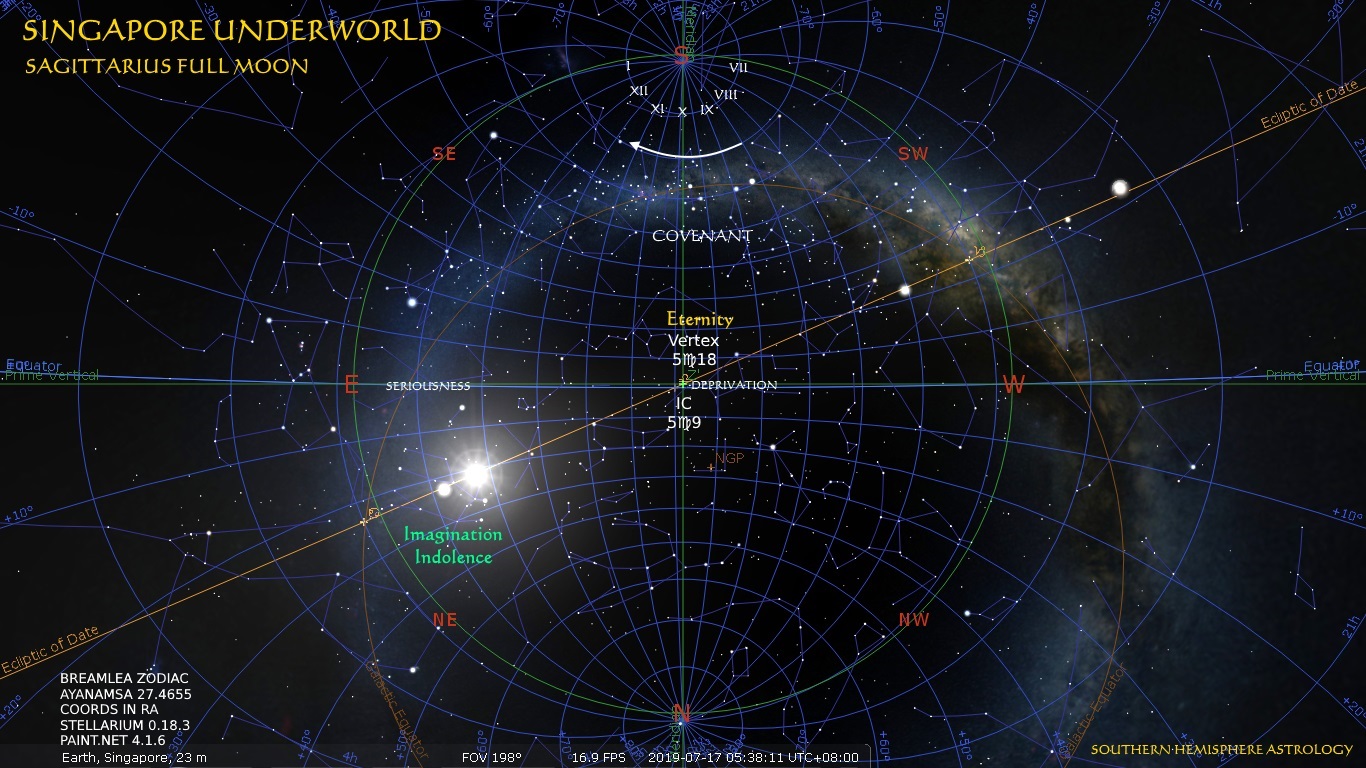 What is the ‘Vertex Flip’? Twice a day it happens for every location in the tropics, where James Cook University has estimated more than half of the world’s population will live by mid-century. An uncomfortable moment from which the majority of humans have escaped into temperate latitudes, it transposes and mystifies the hemispheres of left and right, before and behind and up and down, whatever they might mean. Currently stationed in North Queensland, (among the electorates which decided Australia’s destiny at the recent election,) I must say how tumultuous seem the Constellations of Scorpius, Sagittarius and Capricornus at the Zenith, revolving implausibly into my South. 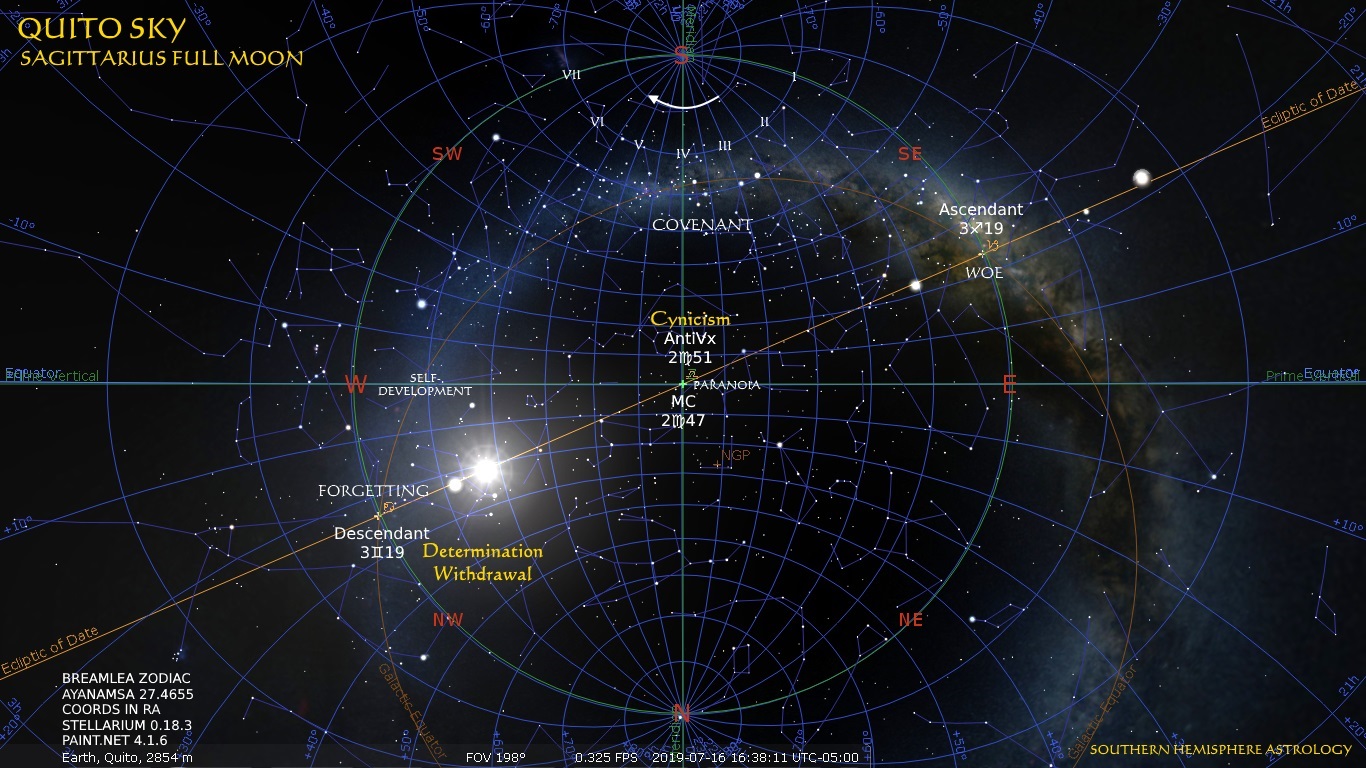 “You are welcome to your inheritance, my sons, whether you’ve blown it already or not. I congratulate you both as flashes of brilliance in the bog of emotion. I am proud of you equally, but what either of you deserve was never in the equation. This I must tell your children as their grandfather: you have rights, evolved in the rationale of the ages in all cultures, and one of them, the right to country, is called Emptiness, not Permanence. Death is the empty gateway to that right, idolatry is an ignoble trap, and a right to serotonin, dopamine and noradrenaline is an oxymoron. By the time they are grandparents, and your dreams and their memory have withered and died, they will know what it means to love one’s workers with their faults, if sometimes in Gemini a little harshly.”