Did you see the eclipse?

Stripped of its light, the Moon was a rock in space, no more. But that space! One of the joys of stargazing, space usually reveals itself only to the intellect, unless the dimensions of the universe are profoundly grasped. On this occasion it was palpable.

The Moon shuddered huge in my night as a ship under its bunks shudders in deep seas. For that moment I understood the thrall of an eclipse to our ancestors, not only in its anxious challenge to a sense of order and in time the magnificent restoration of that sense by astronomy and mathematics, but in a bodily awareness of depth and mass and time and distance as one awful reality to make one’s very existence shudder, unmasked like the Moon.

This post wonders what it is really about, although its occasion is clearly the Moon’s next crossing of the Ecliptic. Is the Moon a dervish reeling inebriated in the divinity of the universe? Has he learnt his gyrations, or is he just trying to stand up? What comes first, the Moon or its orbit? How in fact do Lilith and the Nodes tell us what they have to say about existence?

I know I’ve discussed this elsewhere, but in conventional astrology, the position of the Moon’s nodes indicate the karma which needs to be transformed, what is overdeveloped and what underdeveloped. When the Moon is below the Ecliptic, we are subject to the inherited, the habitual, the traditional. When the Moon is above the Ecliptic, we hear our calling and are exhilarated to heed it.

However, it is not at all clear to me how any influence of the Nodes might manifest. Is it an important influence? I have read several persuasive attempts to meld different manifestations of the obligation and transformation inherent in karma to the characteristics of the Tropical Signs.

Unfortunately, even after turning everything right way up, I have a problem. It takes about eighteen months for the gyration of the Moon’s orbit to swing its nodes back a Sign. Attributing a nodal influence to Signs produces a static situation in which everyone deals with the same karma for eighteen months. Great for identifying generations, or universal moments in an unfolding of consciousness, if they’re your bag, but hour after hour, day after day? The elements of the Moon’s orbit are not static influences like Pluto or Neptune, but immediate and dynamic!

Trying to find psychic or spiritual resonances for what I can actually see in the sky, I really do look forward to the South Node for the uplift it presages. Watching the progress of the Moon in those terms, I chose at some point to respond to Lilith and the Nodes as elements of the Moon’s position. And so I have programmed my computer to generate results within parameters which are entirely arbitrary personal preferences, and which I could change at any time.

But could I? Is it possible that confirmation bias has already clothed my light-hearted parameters as discoveries or inventions? Is this how astrology evolves? Is this how you can be so mired in error that the ludicrous colonisation of Southern skies by northern seasons continues?

The following series of horoscopes for Friday April 17, when the Moon passes Perigee and South Node, shows how the nodal and apsidal influences morph as the Moon changes Sign and Quadrant.

Like all my horoscopes, this presents the constituents of a situation so simply that you can as easily muse on the keywords and then evade them, as play with combinations of them and ignite a narrative of your choosing.

The Moon is 30° before New; it is the middle of the night but only Saturn of the naked-eye planets is visible; Leo is low in the west, Scorpius high in the northeast. Lilith and the North Node are in conjunction in Virgo, which means that the Moon is at its most distant as it crosses the Ecliptic heading downwards. This sounds dreadful, but on the other hand, because it is heading downwards near the Spring Equinox in Virgo, the Moon will reach its lowest latitude at its highest declination in Sagittarius, which means it will reach its highest latitude at its lowest declination in Gemini, and there is some consolation in that.

The question is, in what way are the nodes and apsides real? A Virgoan can be expected to adhere to fastidious solutions to separation’s implication of impurity, and Virgoan karma focusses on avoidance, but these points are in the Constellation Virgo, not the Sign. Libran qualities for Lilith would be vacillation and ambivalence in conventional astrology, converting to Arian irritability and pride in Southern Hemisphere mode.

But let us ask the Moon! Does he conform to mathematical orbital rules, or does his mass and momentum swing his orbit around his waist like a hoop? Above, he is in Southern Sidereal mode in the 4th Quadrant, a Leonian Moon with Leonian Lilith and Leonian karma. His nodes remain in Pisces and Virgo, but their effect is expressed by his latitude in the Constellation he is in. Below, in Northern Tropical mode, he is approaching an Arian denouement.

In the second Quadrant, The Moon juggles mirrored tropical influences, moving fast and about to boil over!

In the third Quadrant: 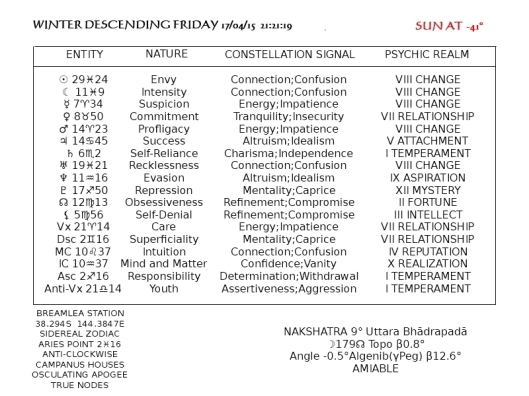 the Piscean nodal axis has something interesting to say about Librans.

And finally, isn’t it self-denial that makes compassion (rather than sympathy) such a challenge for transplanted “Arians”?

The Ghost in the Machine, c’est moi!