It is a fact in Southern Hemisphere Astrology that the life-giving spirit of the Sun is female, and the emotionally needy creature bobbing around from one Nakshatra wife to another is male. However, the sudden appearance of a host of archangels with masculine names is a sure sign that masculine dignity is in need of some restoration.

Be that as it may, the seasons in this part of the world seem to align with the transits of the ‘archangels’ in the system, not with regular intervals of the Sun’s ‘journey’. The seasons I refer to are the seasons observed by the indigenous people of this ‘country’, according to the scholarship you can find at http://www.herringisland.org/seasons.htm

What better time for a new season to announce itself than at nightfall, the only conceivable time anybody is going to glance at the stars these days? And what distinguished stars—the four ‘Royal Stars’ and the two brightest stars adjacent to the zodiac—have pushed themselves forward for the honour of making the announcements! 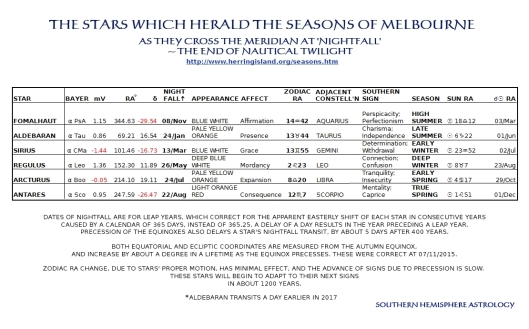 Impossible as it is to see, we do however know the Sun’s current position: it enters the SHA constellation Libra tonight, in the Eighth House. Fomalhaut transits at that precise moment, as if emphasis were required! 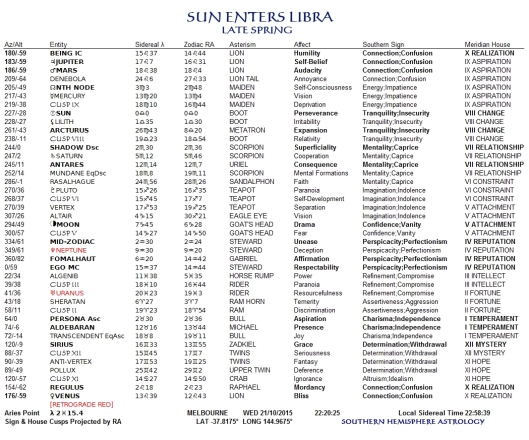 Note that for the interpretation of signs SHA has effectively increased its ‘ayanamsa’ from its present true value of 27.744° to an even 30°. Why not simplify things? To uncouple signs from the equinoxes and align them with the constellations—opposite tropical plus one—makes a difference of two days (decreasing to zero in 160-odd years), and what is two days in this turbulent era of climate change?

1 thought on “The Seasons”