A mandarin’s job is to give form to the ruler’s vision. His aura is charismatic, his skill intrigue, his accomplishment cohesion. A large group of them has assembled in Vienna, in the hope of negotiating a peace settlement in Syria. The precise opposition of this Moon will be above them, hammering the importance of independence and self-criticism, despite the self-justifiers thronging cabinets back home.

The impact of tomorrow’s Full Moon is to highlight the swing of opinion we are seeing in relation to radical Islam. Cooperation is being challenged as a value by those who see its tendency to relativism and its accommodation of victim mentality. I cannot remember a more tumultuous upheaval of thought. Is it just coincidence that the Moon’s Nodes are announcing a new challenge to us to focus, against a tendency to avoidance?

[The South Node is on the boundary between Aquarius and Pisces, and during the year to come the Moon’s Southern Lunistice, its highest position above the Ecliptic, will move gradually away from Gemini through Taurus, bringing the Moon very close to Aldebaran as it passes. The eye of the Bull is a stolid presence, and the interplay of the two bodies at conjunction will be interesting as the Moon’s hubris wanes and waxes in these turbulent times.] 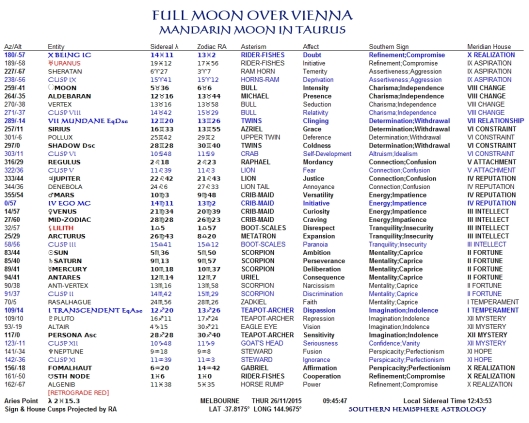