The zodiac is an entity like the conscious human mind, the inorganic energy transfer processes at the root of life, the gears which drive the hands we hardly see when we ‘tell the time’, or the keystrokes on a qwerty keyboard that produce ‘laughter’ and ‘crying’: it takes shape!

It suddenly hit me one day that we recognise ‘things’ by their structure, but structure generates itself in the world—as it generates its idea in my mind—out of shapes which endure because they fit.

Shape is the wood of trees and a wood of trees. It is what is shared in pairing, what crystallises in solutions, what appears out of a fog, what connects a narrative, what constitutes a mood.

Only bits of the zodiac are visible at a time, and the bits that are visible have enduring rather than permanent shape, but the whole sky resonates with them! Like the waves of hormones which roll through a brain in the course of a cycle of light and dark, the shape of the zodiac shifts in a peristalsis which is both ingress and egress, cause, initial condition and consequence.

We know that the bits we see are connected to the angles made by Earth’s axis with the stars and the Sun, as we know where the sky goes below the horizon. We know so much more than the draughtsmen of the zodiac that what we don’t know may come as a surprise.

Everything is in the zodiac because ‘everything’ gives the zodiac its shape. The poles of the ecliptic are in the zodiac, as are the equatorial and horizontal poles. The stars which are adjacent are also opposite, and the stars which are never visible are circumpolar in the opposite latitude. The seasons are in the zodiac, and so are their opposites, because of the nature of shape: a lion can be a charismatic lionheart one millennium and a bit of an irritable know-all the next, a benign dictator or a bungler in intimacy.

Feel the wave of his stars roll through you, bringing the awareness of infinitely complex implications to your best intentions. See the hands of connection and confusion tick around the clock of the south at all hours of the day and night. The South Celestial Pole—your latitude above the horizon—engraves ‘E’ at 9 o’clock and ‘W’ at 3 o’clock and somehow the hands at those figures always point down and across to the cardinal directions on the horizon. Marvellous contraption!

Henceforth we shall consult it as a frame of reference. And immediately we strike gold! We have already met the coincidence of Australia Day and Southern Cross daybreak transit. Now, with our enlightened appreciation of shape, we are presented on late January mornings in ‘complete’ darkness—darkness is never complete, even in death—with the rising of the shape known as The Emu.

but briefly this is a gormless individual prey to delusion who straddles many signs, recognised by the first, unrecompensed, owners of your property many thousands of years ago, a marvellous sight an hour and a half before sunrise, and may I suggest a typically strident justifier of faith ever implicated in the contemporary phenomenon of straggling haste?

Did I mention that today marks the arrival of Late Summer, as Aldebaran crosses the meridian at nightfall, or that today the Moon is full in Cancer, transiting 5 minutes before solar midnight somewhere over eastern Greenland? 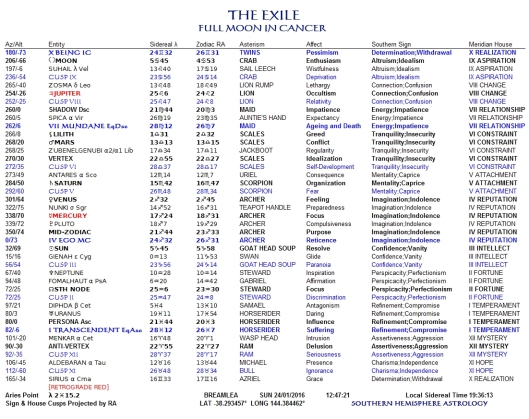 Have you experienced exile?