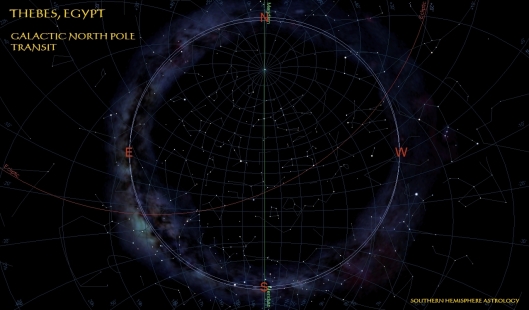 The Milky Way has been given precious little attention by astrology, no doubt because the riches of the Galactic Centre are invisible to most of the Northern Hemisphere, and planets rarely approach either of the great rivers of the Milky Way at night. Perhaps it has occurred to someone up there to consider the symbolism of Cassiopeia, which appears as the letter ‘m’ or ‘w’ due north according to which galactic pole is at transit, Southern or Northern, with the obvious gender connotations in the English language, but I doubt it.

Here in the South, we are indebted to various universities, and the researches of Ray Norris, Robert Fuller and Duane Hamacher in particular, for their disclosure of the significance of the Milky Way in Australian Indigenous cultures, but I suspect that most people are not aware of where it is in their light-polluted night sky, let alone how its configuration changes by hour, day and month.

Briefly, the Milky Way observed from the Southern Hemisphere moves continuously around the sky with the following six punctuating configurations:

In a suburban or rural-transition sky in Wurundjeri country, when the Sun is more than 18° below the horizon, visibility of these six configurations is afforded as follows, remembering that  everything in the night sky except the Moon and planets appears in the same place roughly four minutes earlier each day. 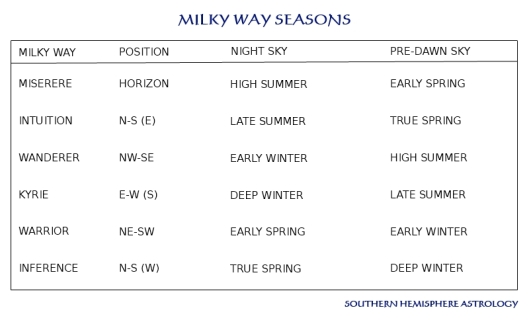 Please do not assume that I wish to attribute some causal mechanism to the Galactic Plane. On the contrary, my motivation is simply to create more interest in looking at the sky and finding in it signs of meaning. The synchronicity of freeze-frame configurations of the Milky Way and Dr Beth Gott’s Wurundjeri seasons may be delightful to one uncomfortable with inverted Northern Hemisphere seasons, but the cycle presented is continuous, by night and day, and I shrink from adding another invisible influence on personality. On the other hand, the bisection of the Zodiac is too tasty to resist. I hope my arbitrary labels of conventional astrology married to pop psychology, Christian liturgy and Greek mythology will provoke intuitive reaction, at the very least, if not whole-hearted disbelief in rationalism. 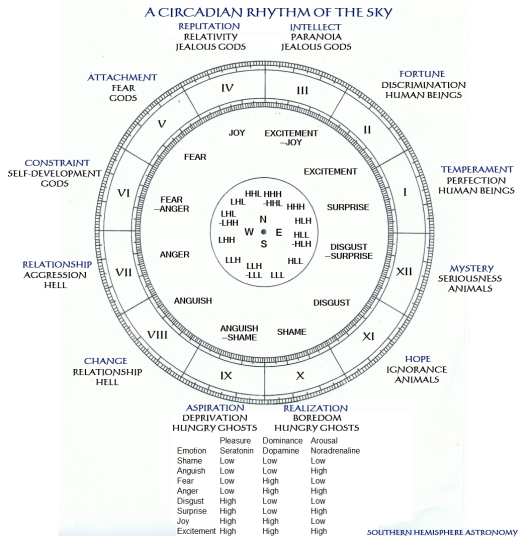 to describe the journey through Hades of the meridian and any body moving through the Zodiac and crossing its rivers could be confabulated in such a sequence as this. Nearly drowning in the swirling torrents of the Acheron the emotions desperately try to save themselves at each other’s expense. Humiliated, they ruefully recoil into the psyche as the ‘wound’. There follows an experiment by a self which admits no feelings other than empathy, but the perfectibility of this self is so battered by compromise that its structure collapses, and after succumbing briefly to the image others applaud of its aggressive survival, it then mortifies itself in the Lethe, in abnegation of itself as sufficient reason. Lo and behold, the emptiness of thought is the raw material of love. Community beckons, but resentment grows as the emptiness of love too is revealed, culminating in the turmoil of full-blown rejection, and retreat into the pages of self-help and astrology.

It is a mental illness to be habitually confined to a prison you are aware you have made for yourself, but be actually unwilling to escape. Welcoming, you impose too many rules; being welcomed, you refuse. You are always both oppressed and oppressor. You shouldn’t take things so personally. It’s only a temporary orientation of the Milky Way. Be grateful you can’t see things as they were seen here (and in Thebes) five thousand years ago. The Underworld can be so disturbing, it must be invented.

2 thoughts on “Acheron and Lethe”