No matter where you are on this earth, and no matter what system of belief you inhabit, the night sky is studded with the stars grouped by perspective into the western astronomical constellations between Virgo setting in the west, Scorpius at transit, north or south, and Aquarius rising in the east. The Sun is in Leo. That much we can infer, regardless of how far it is from the Pisces Equinox, or which season it is in by the Tropical almanac. Whether it is Virgo perspicacity or energy which stirs in your veins, the Lion will for an instant across the United States today demonstrate its presence, as the Moon for that instant discloses the relativity of the Sun. 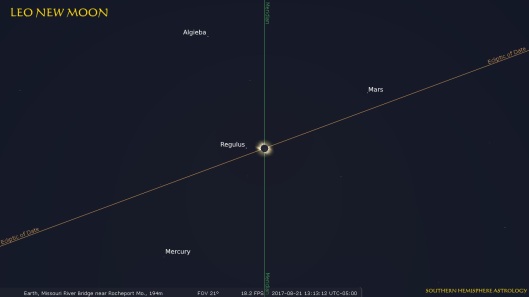 Disclosure is the process of finding yourself out, learning the rules, those that are imposed and those that you instinctively or reflexively assert, and the resolution of conflicting rules is your choice of who you want to be. When you accept that you cannot always get what you want, when you discover oppression is largely wanting what you can’t have, when the sky doesn’t fall in when a rationalizing of your priorities removes the urgency of much of what you thought you wanted, you enter a new phase of disclosure.

In this process you discover ambiguity and relativity, that there are reasons why people often do not understand you that go beyond you being right or wrong, and by engaging with intersecting lexicons and narratives you develop your own philosophy and a creative perspective on the arbitrariness of the system you inhabit. This development is the intention of deconstruction. Sadly, the outcome of the process you are led through in your education often falls short of the ideal. Relativity can erode the sense of being someone whom everything is relative to. That your language embodies power structures and implicates you in offences you deplore leads more easily to the learning of new languages than to humility and responsibility, when there is nobody speaking it.

The hardest thing to appreciate is what emptiness is full of. You can’t undo the twists and turns of your story by getting out of it, because that too is just another twist. You can’t absolve yourself from the harm you’ve done by attributing it to someone else’s influence or the ignorance of your victim. Karma is the implication of what you don’t do too. The language you no longer speak continues to resonate, and others continue to interpret the story you have vacated. In the end, the things you deconstruct remain things. Whatever an eclipse means to you, the birds will fly home at the end of a shortened day and relaunch their affairs at the end of a shortened night for a repeated shortened day.

This is a depiction of disclosure. Its author has discovered the relationship of inferred Sun position, seasonal formative conditions and human personality, and already suspects his system to be the tip of an iceberg. That is to say, he has reached a realization of subterranean influences on behaviour which dissolve behaviour in an infinity of the unconscious, the mystery of which is reduced to absurdity by systems of conscious explanation. It is only a small step to reproduce the moment in another time and location. 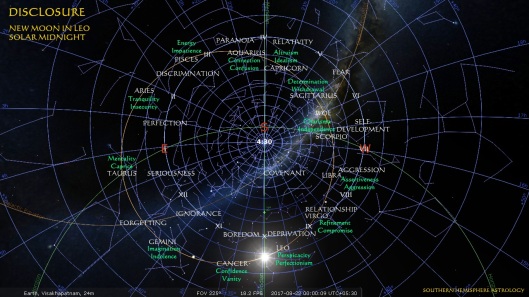 There is a third phase in the process of disclosure. When you have accustomed yourself to ambiguity and relativity, and thereby learned to forgive the agency of others in the injuries you have sustained and which have so profoundly affected the course of your life, when you have forgiven yourself for the injuries you have inflicted on others, and finally forgiven yourself for bearing injury like everybody else, rather than seeking to remove it, you begin to forget. Now it is in your dreams that disclosure proceeds. People who were once central characters in your play reappear on stage in strange roles. Familiar events are recomposed, containing discriminations and formations which are recognizably yours, but quite inside out. It doesn’t matter.

South or North: each is the other buried. Now you really do have a story to get out of: one beyond history with unlimited permutations, without beginning, middle or end, without fixed plots or identities, without seasons or opposites and without author or audience. Disclosure is disclosing itself. You are in old country. Welcome to the empty mirror of the Bardo.