Is life a journey? Does one day, month or year to another measure a distance, or does duration just go around in circles like the hands of a clock? What is this mysterious ‘Now’ the self continuously inhabits? Does it transcend time, or is it a piece in the journey’s jigsaw-puzzle? Is it ‘Country’? Is it emptiness? Is it no more than the struggle for existence between birth and death, or a moment of emergent Being as it learns and actualizes the interplay of an infinite array of evolving controls? A serious question: are you conscious or unconscious? In 17 days it will be 140 years since a ship’s apprentice by the name of Tom Pearce rescued Eva Carmichael, around 2 hours before a New Moon in Taurus, the only other survivor of the wreck of the Loch Ard. (No, they did not marry–read this eerie story, by Tony Wright, at the Sydney Morning Herald.)

A similar configuration of the southern stars is visible all over Eastern Australia. Come on, quit your studies and social media conformity, and bow with me to hear the Kyrie, at journey’s end. Along the Shipwreck Coast an estimated 638 journeys ended in tragedy. I’m afraid you’re staging for a free-kick if you can’t budge from your ideological opposition to the invasion which resulted from the courage of your ancestors lucky to get here to spawn you. Our lives are a complicated mechanism, and if truth be acknowledged, we are a little rusty. We have too many conflicting theories of how it works, and as many therapies for its repair in situ, but having eliminated religion and sympathetic magic, even applying objective understanding to the emotions, we find the mechanism lacking in an essential input, the lubricant of communion, the sense of shared energy within, and the security of being another’s Thou which comes with the faith that we can get inside each other.

“Man needs vengeance like a tired person needs a bath.” (Baudelaire.) The ‘Realm of Hungry Ghosts‘, represented in my charts as the Houses occupied by the Sun when we’re usually asleep, is always operating in us unconsciously, and if you’re stuck with an insatiable desire for revenge, an unshakable belief that you could be the person you want to be if someone’s actions hadn’t denied the possibility forever, or you can’t help loving it when you see another person suffering, you may need to enhance your conscious connection with where your dreams come from. Try closing your eyes in a public place and imagining there is no way of measuring how far away the hubbub is; or try in conversation to be the person your interlocutor thinks you to be.

Here is a chart which represents where the European invaders on the Loch Ard might have thought they were on the morning of their death so far from home. 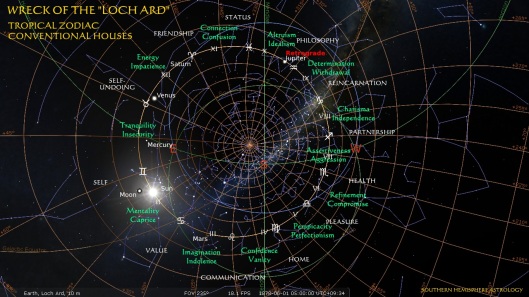 The New Moon was soon to occur in Gemini, but there was nothing Springlike in the fog in which their journey ended, and no familiar Zodiac was lurking in the southern sky anyway. Woe at the Vertex (though it hadn’t been invented yet) was not an auspicious sign, but otherwise the portents for their new life in Terra Nullius seemed favourable enough. However, a local perspective tells a different story.

Sun and Moon were not highlighting the Ascendant House at all, but the Animal Realm, where taking yourself too seriously on awakening is a natural cover for ignorance, but it may have been the retrograde motion of dauntless Jupiter in relativist Capricorn and the idealist hunger of Cancer that did them in. Perhaps you should try to imagine this was you, but you should definitely eliminate the intergenerational trauma of not finding the Zodiac when you look to the south. 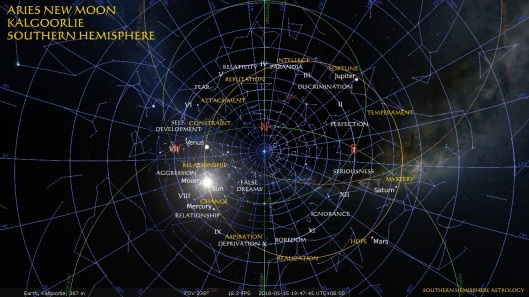 Back to 2018, when the IAC and tropical astrology agree that the May New Moon occurs in Taurus (1° and 14.6° respectively), but I have the Sun 2½ days away in Breamlea Aries. The important thing is to know where we are, and that is definitely not in a seasonal quarter neatly divisible by three. Deep Winter in Victoria arrives in a week, but it came early, didn’t it? Not only Southern Hemisphere Astrology believes that Kalgoorlie ego and mood are contiguous in the Bardo Realm of Hell, but arcane powers as well. 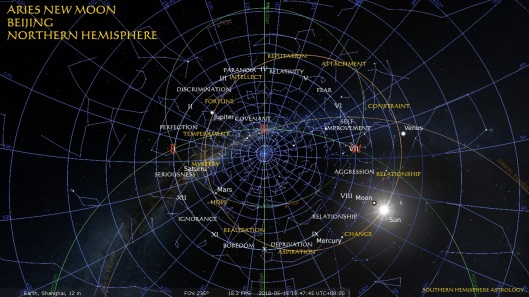 The Bardo Houses are identical on the same meridian north or south of the Equator, a facticity of profound interest to forces for integration and harmonious difference. You may imagine what use in diplomacy might be made of knowing the unconscious mood of entire populations, and being able to project it from your own experience. Furthermore, I am not the only one who has established that the Houses are opposite on the same meridian the other side of the geographic poles.

In the age of artificial intelligence and psychological and virtual warfare, these elements of Being have not gone unnoticed. Moscow’s meridian passes through the Middle East, Washington’s through Cuba and Ecuador. I believe I am at the forefront of incorporating elements of Australian Indigenous wisdom in my self-examination, formatting Milky Way configurations with the cardinal directions of Country, but I cannot be at all sure of that.

To succeed in life you must assert yourself. Don’t worry about who your self is–it’s a passive, defeatist predilection to think of life as a set of rules to obey, or a race you’re not winning, especially if you’ve retired hurt. Life is not a straight line, but cycles within cycles, circles intersecting incongruent circles, and you must always be ready, like a fox evading the hounds, to leap sideways, from one merry-go-round to another, one treadmill to another. Opportunism is a characteristic of the ground of being. If you reflect on your addictions, you will know how opportunistically they multiply their positive reinforcements.

“So you don’t have to look painfully for some kind of stepping-stone; instead, a stepping-stone presents itself in your life. You have the confidence to start on the first thing that is available within your experience—if you know the geography or road map of developmental psychological structures.
…If you try to create something by will, you have to use accidents as a way of channeling yourself.” (Chögyam Trungpa, Transcending Madness.)

Hurls its toys against a nursery wall daubed

With experiments in defecation.

Try as noon might to wrest behaviour from dream

the puppet-strings of meaning.