I’ve been reading Chӧgyam Trungpa’s Book, Transcending Madness–very appropriate subject matter for Southern Hemisphere Astrology! My whole enterprise is mad, it seems, dropping breadcrumbs in the moonlight towards the mouth of a cave–of identity, of conventional astrology–people don’t want to leave, with birds as my only retinue.

In the process of reading, I recognized the realms of existence and the Bardo states as mapping the same terrain as my interpretation of the astrological Houses. My first merger of the two maps was this one: 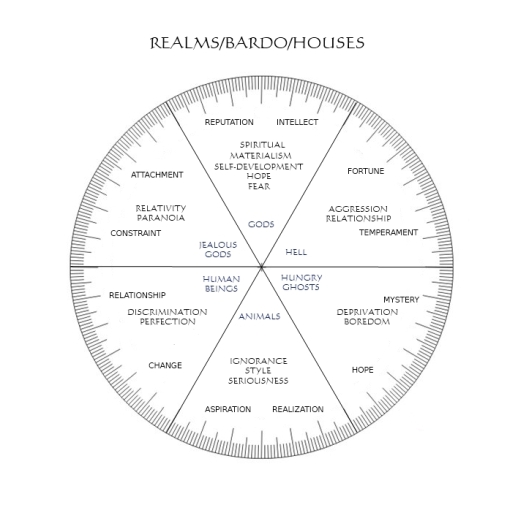 Like any map, it took a while to orientate, and playing around with it, I came up with this one: 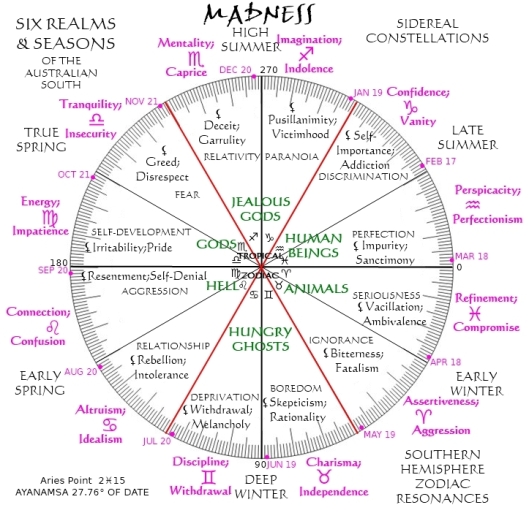 This one satisfies me for now. You can see how the resonances of the Constellations align with the Zodiac and the seasons, and with their opposites across the chart. You can also see the effect of my chosen Ayanamsa of (currently) 27.73° (whose origin is Iota 1 Scorpii at 0° Sagittarius–so important to preserve the tail of the South’s most prominent constellation!) on the Sun’s sidereal location throughout the year.

The title of this post mentions Thou, and that’s what I want to get onto, but because of its importance in my understanding of madness, and because of its prominence in the chart above, I will tell you a little about my concept of Lilith, Black Moon Lilith, whose glyph appears in each Constellation above.

Lilith is a strange compartment of the psyche, buried so deep as to have no real location, and yet its ghost lingers in the shadows of every corridor. Mathematically, it can be found as the hypothetical apogee of the Moon, bouncing around all over the place as the Moon’s orbit lurches through the turbulent influences of Sun and Earth (and Venus and Jupiter etc.). Astronomically, it can be identified by measuring the Moon’s distance at its greatest. Psychologically, it symbolizes our earliest, most distant but fundamental emotional experience, separation.

What was our first experience of emotional pain? How did we come to define it? How did we react and perceive the response to our behaviour and our training to overcome it? How did we understand the sanctions of our early training and internalize them? How did the chaotic feelings of frustration and anguish translate into behaviour? How did that behaviour contribute to the form of our early relationships? How did we modify it ourselves as we came to evaluate the behavioural models before us? Along what path to attitude did we remedy ourselves? What are we made of: remedy or pain?

Aren’t we mad, the way we’re so sane?

In the chart I suggest keywords for the possible ways in which you could differentiate behavioural pathways according to personality type, and perhaps more importantly, how you could find the seeds of personality in fortuitous behaviour type. Here is a link to some fine work on Lilith: http://www.expreso.co.cr/centaurs/blackmoon/lilith.html

The graphic representation of sidereal/tropical date-difference of Sun entry of the Signs and Constellations in the Madness chart got me thinking about what I now know as ascension difference. My question was, how long after the ascension of the first point of a constellation does the ascension of the next sign follow? It turns out that because of the tilt of Earth’s axis of rotation, and the inclination of the horizon to the Ecliptic, the relationship of sidereal and tropical zodiacs in time varies markedly. Here is a representation of that: 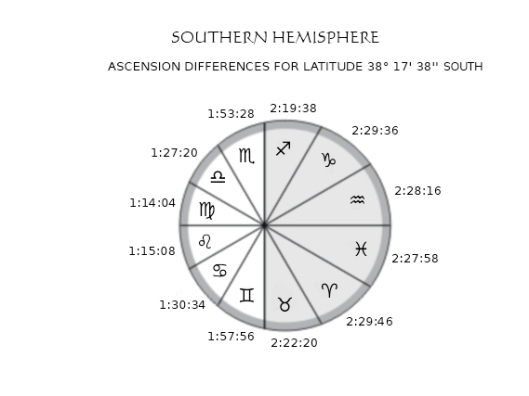 The times given in hours:minutes:seconds are of how long each Constellation takes to cross the Ascendant at my latitude. The time it takes the next associated Sign to rise after the first point of each Constellation varies between 5:27 and 11:18 (mins:secs). At the extremes, it takes Aries 2:29:46 to cross the horizon and 11:18 for the Sign of Taurus to follow; but Virgo is across the horizon in 1:14:04 and the Sign of Libra follows 5:27 later.

What has this got to do with anything? Well, what you see above is the opposite to what occurs in the Northern Hemisphere, where our short ones are all long and our long ones are all short. Furthermore, because the Ascendant takes longer to pass through the long ones, the likelihood is that more natal horoscopes will have Ascendants in long Signs than in short Signs.

The Wikipedia entry on the Ascendant includes this juicy morsel:

“Some astrologers, such as Richard Nolle, consider the preponderance of Ascendants in signs from Cancer through Sagittarius (known as the western signs) to be symbolic of the highly relationship-oriented character inherent in a complex or civilized society as found today in the northern hemisphere but never developed in equatorial or south temperate latitudes where eastern (Capricorn through Gemini), individual-oriented Ascendants are equally or more common.”

I can’t at present find in nature a basis for differentiating Eastern and Western Signs, other than that depicted above, but thanks for focussing me on the western hemisphere, Richard. It’s where the interesting things happen down here too, such as the behaviour of the Vertex.

Referring to the Ascension Difference chart, and bearing in mind that the Equinoxes are at 2.27° Virgo and Pisces, the Ecliptic in all of the Constellations below the horizontal line crosses the Western Horizon north of due west, so that the Vertex is below the horizon. The configuration of the Constellations as shown, with the Southern Summer Solstice in Sagittarius at the top, occurs 3min 56sec earlier each day, this morning at 08:52:49 EDST. For several hours beforehand, the Vertex, as astrology refers to another imaginary point at the intersection of the Ecliptic and the Prime Meridian (or due west), looped through Gemini, Cancer and Leo.

As the projection onto the Ecliptic of the Descendant or Shadow, the Vertex, which has been named Destiny’s Gate by one astrologer, lurks in the western, afternoon and evening Houses, in which relationship reveals the nightmarish difficulty of merging consciousness with others, and when flagging egos often suffer more than glancing blows. It symbolizes both the danger and the blissful anticipation of that most intimate Other, the Beloved.

As I configure the resonances of the Constellations in the Madness chart above, associating them with their opposite Zodiac Signs, the Vertex had quite a journey! (Lilith was in Cancer.) It ultimately reached a tense conjunction with the Shadow at the time stated, and clambered above ground like the ghost of Sadako in The Ring, lurching into the earnest spiritual materialism of Virgo. The journey will repeat itself tomorrow.

4 thoughts on “Bardo, Lilith and Thou”