And wash thy white thigh, beautiful God,
In the moon, of the woods, on the marble mount… Crowley, Hymn to Pan

“To give each emotion a personality, and a soul to every mood! The girls came around the bend in a large group. They sang as they walked, and the sound of their voices was happy. I don’t know who or what they might be. I listened to them for a time from afar, without a feeling of my own, but a feeling of sorrow for them impressed itself on my heart. For their future? For their unconsciousness? Not directly for them, and perhaps, after all, only for me.” Pessoa, The Book Of Disquiet.

Chorus: We are the voices trying to make sense. Interesting expression, isn’t it? No, the Zealot is not your enemy, but still a dangerous fool. While Sol completes her ritual cleansing in the history fade of the Lethe, Chaos rules, except in the heart of the Zealot, who crosses the Acheron in such emotional pain as to defy description. If we have welcomed you to our people with the rape and murder of your daughter, or your son it was who defiled our world in that act, you know the Zealot’s pain. It is shame: there will never be an end to the suffering of innocents while he continues to cause it, and he can do no other. He is driven by animosity to the identity we have moulded for him: his mind is unhinged from ours; his heart is in his brain, not our mind. The underworld is a dangerous place: the brain makes our body, and it is visible.

Forget the tour leader and the bus driver, ignore the American tourists. How beautiful is this? Would you rather listen to the tour guide’s explanation of the way the Milky Way turns, be left alone to discover this intriguing synchronicity for yourself, or just go back to the hotel and get warm? For ages I was a man, then in a small pocket of the human imagination a woman. Recently, above an infinitesimally small outcrop of sedimentary rock in Terra Nullius, I have been restored to masculinity, but an emasculated masculinity, reflecting with counterfeit beauty the life-force of the feminine, trying forlornly to outshine her. And yet, looking at me high over your head, can you have lost all amazement that I do not fall on you? I am an ancient symbol of polarity and duality but I will overcome inequality. I will transcend gender. Men, together, we can restore our beauty.

Chorus: The Zealot is a voice inside you, another voice claiming with overwhelming justification to be yours, but calling you to be Other, with no other power than yours to be, Other, here. It is not a will to meaning per se, but a persistence of meaning through the consciously bewildering bombardment of the ego by meaningless objective relativity: the possibility of instinctive truth, but a truth resisted by complacent social identity unto death. The Zealot campaigns for the body against the sovereignty of the social. The Zealot is in the body of the world, your sky. It is none other than the will to live, the autonomy of the organism. Awareness of the Zealot has its equivalent in our consciousness of geography: it’s called the Antipodes, and its sky, reflecting ours, illustrating the duality of Signs, provides an opportunity for us to evade the trap of fixed identity, whether imposed by ourselves or others. 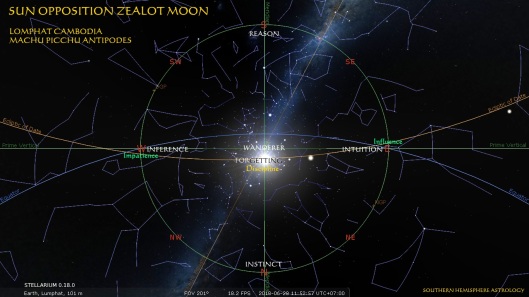 If not in your gaze I am a rock with 0.120 albedo. You are required to notice that I am getting older, my teeth falling out, my waist thickened, my breasts and buttocks drooping, and to find that beautiful. It took the greatest minds of the modern age to understand my mechanics, but it only takes you to make me beautiful. I am a sports car hurtling through a deserted alley, and I am not to blame for nearly hitting you when you appear out of nowhere.

Chorus: It is the age we have arrived in, that Solstice Full Moons bring widespread confusion of the mind. We are apt to believe that opposites are reconciled within systems, transgression is a schism like the parting of the Red Sea, and dismantling narratives leaves us with something to be. We are not astounded by the approach of Venus to Regulus after another eight years, because that is just the way things are, in the Solar System. Woe to the Goddess of Love and Beauty, voided by mathematics! What has happened to our hearts since 2010, and will they be filled with the joy of intimacy by 2026? No, the condition of the heart does not depend on a system, of compatibilities or irreconcilable differences, but on whether or not the discovery of Beauty and constant reverence for it have transformed chemistry into astonishment and gratitude. 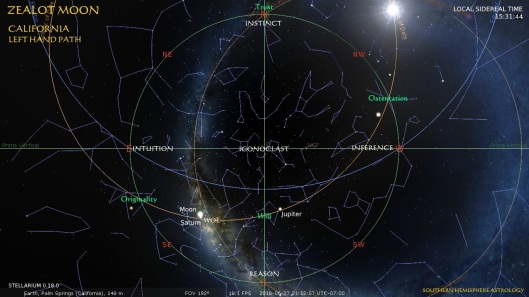 If you have ever talked to somebody so close it was really yourself you were conversing with, and if ever one night you have found nobody there, or she was asleep, then you may have been praying, or heard, in a social vacuum, your ancestors, giving voice to the body of the world. It’s a way the universal brain has of reassuring our mind that madness is normal, like the Chorus in Greek tragedy. You call it God.

Chorus: The universe is conscious, except not a mind but a body like ours, controlled by a brain we call the laws of physics. Only beauty can create universal mind, in its beholding. We are not here to be elsewhere. And yet elsewhere is here; unconsciously regulated by the brain. That bodily function is peculiar to you, not your identity, but merely a constant refining and adapting of your organism to your affect on the world and its affect on you, a correction of mistakes and a rearguard action on behalf of yesterday against who would swap healing for beauty. The more you trash beauty, the more habitual become both the impossibility of intimacy and the reinforcement of your doubt in yourself.

A woman once thanked me for giving her back her body. I now know that she was inadvertently giving me mine. In every moment that men shine, half of their wives are shining elsewhere, but incessantly active in a warrior’s sleeping body. Tomorrow in Rome, the warrior awakens at first light. Let him remember the ineffable beauty of his white thigh as it disappears down the rabbit-hole of hers. It is the country we came from.

Chorus: We make only metaphorical claim that the arms of the Milky Way are rivers of Hades, and ever were so regarded, and that the orientation of the galaxy influences human behaviour, and that the crossing of the galactic plane by the Sun, Moon and planets, invisible in daylight, bright moonlight and light pollution, has an effect on us as social beings. Coincidences of position and configuration do have the potential to enthral. The current production is intended to entertain—is meaning anything else?—and why shouldn’t we entertain ourselves with synchronicities of human behaviour and perspective that can enthral? Self is country, which is embodied emptiness. We leave the stage now as the Covenant of the upright Cross begins its annual extinction in daylight.

You have twelve nights to give body to the embrace of the goddess of beauty and the venomous Little King, but half a year to make tangible what terrain may lie between the Lethe and the Acheron. Better get to it!

Are we down a rabbit hole? Are there emotional vampires here? Am I one? Are you strong enough to be my woman, werewolf?

“If you can keep your head when all about you
Are losing theirs and blaming it on you…
Yours is the Earth and everything that’s in it,
And—which is more—you’ll be a Man, my son!” Rudyard Kipling, “If—“.

“Who cares for you?” said Alice (she had grown to her full size by this time). “You’re nothing but a pack of cards!” Lewis Carroll, Alice In Wonderland.

1 thought on “Zealot Moon in Sagittarius”