“Defined in the end by its disenchanted context, the human self too is inevitably disenchanted. Ultimately it becomes, like everything else, a mere object of material forces and efficient causes: a sociobiological pawn, a selfish gene, a meme machine, a biotechnological artifact, an unwitting tool of its own tools. For the cosmology of a civilization both reflects and influences all human activity, motivation, and self-understanding that take place within its parameters. It is the container for everything else.” Richard Tarnas, Cosmos and Psyche [Viking, 2006, p.33].

A drone is an unmanned aerial vehicle, like a satellite without responsibility for its own trajectory. The meanings we have given the Moon’s orbit derive not from its motion, which is straightforward, if subject to gravitational influences and historical violent collisions, but from our perspective. However, not only its elliptical orbit and the inclination of its orbit to Earth’s but their phenomena belong to the body of the world. The Moon’s angular distance from the ‘First Point of Aries’ and its deviation from the Ecliptic are real, and so is its apparent size and phase, though these are not its properties. The law which has always addressed and divided humans, punitive and often aggressive and cruel, is real in the same way. Its initiates are drones; it is inherent in country as a phenomenon, not a property. Country is the body of the world we are made of as we perceive it, or rather create it with our perception and account of ourselves.

To recognize the Constellation of Capricornus in the night sky is to be seduced into an expansion of its proportions. The smallest Zodiac Constellation is also exceedingly dim over cities, but to compensate, it can impose its shape beyond its boundaries, across the entire field of vision, because it is replicated by the stars surrounding it, as the personage inhabits the child who wears an item of its clothing. 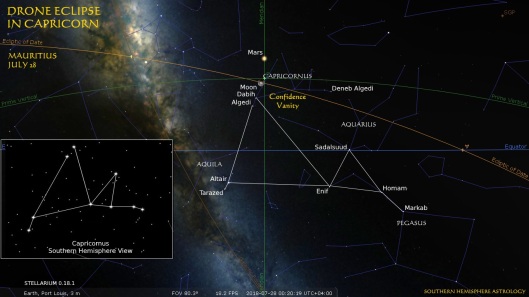 The Fish-Goat was placed in the heavens by ancient reverence for duplicity as the birth-pangs of subjective consciousness: for the state of being one thing in the world of aggression and another in the inner space of difference. Capricorn is the symbol of deceit. The fish-goat was fatally flawed: it was ruled by the desire to under-stand the gods. It was obliged to climb out of the waters of oneness with the tides of spirituality to actualize the commands of its god. Sadly, by the time it clambered onto the historical shore, social relations were no longer a chorus of inner voices, but a mime of certainty obtained from the soundless reading of the written word, and the goat-fish could not read. He became a goat, his own body, and lost his mind to goat’s head soup.

To this day, Capricorn in the Breamlea Zodiac continues to resonate with the concern for authenticity which is the hallmark of the present age. As a late summer constellation, a mansion the Southern Sun occupies from January to February, it carries the fifth Sign of Leonine confidence, but as the winter mansion of the Southern Full Moon it also carries the eleventh Sign of Aquarian altruism. It symbolizes our struggle with deceit, life making do with the subordination of care and the subterfuge of being. Gone is the Aquarian impulse to found a harmonious commune—the New Age has morphed into a therapy for addiction and dissent—and gone is the respectability of an inner life immersed in canons of literature and music. The techniques developing today are to affirm identity from hostile country, to give voice which overcomes noise, to colonise public space, to stop hiding, to dream the life, to think the body.

You have been brought here to the Port Louis Casino to observe how these techniques might be more successfully developed and employed on country. For tens of thousands of years the Moon has presented its metaphor for human existence, waxing and waning, emulating the path of the Sun optimistically in winter, soberly in summer, regularly and irresistibly receding and drawing near. Tonight, by remote control, we are synchronized with the Moon’s eclipse at apogee. What can we learn from the Moon’s survival of bombardment of our own experience of persecution by the world? Can we emerge from violence non-violently? Can we slough the fishtail of an eye for an eye, pause in the struggle for existence on the stony paths of goathood to enjoy ourselves, without creating enemies of mind and body, self and world, instinct and expertise? Can we create country in our own beautiful image? Can we both empty and own our body, its eccentricity, obliquity and remote-control eclipse?

The good people of Nhill have set the standard for living on country. All you need to know is how to put yourself on the map, obliquely perhaps, but always with good grace. We’re all winging it, aren’t we?

“‘Where is God?’ he cried; ‘I’ll tell you! We have killed him – you and I! We are all his murderers. But how did we do this? How were we able to drink up the sea? Who gave us the sponge to wipe away the entire horizon? What were we doing when we unchained this earth from its sun? Where is it moving to now? Where are we moving to? Away from all suns? Are we not continually falling? And backwards, sidewards, forwards, in all directions? Is there still an up and a down? Aren’t we straying as though through an infinite nothing? Isn’t empty space breathing at us? Hasn’t it got colder? Isn’t night and more night coming again and again? Don’t lanterns have to be lit in the morning? Do we still hear nothing of the noise of the grave-diggers who are burying God? Do we still smell nothing of the divine decomposition?…’”
Nietzsche, The Gay Science, Book 3, §125, “The madman” [Trans. Josefine Nauckhoff, Cambridge University Press, 2001].

“…It’s not anger that I feel towards the two of you, it’s something much, much worse.
It’s pity.
You have no empathy for your fellow man, and you clearly have no idea what love is.
So you have nothing.” Anthony Maslin.

What do you see when you look at the bully?” Rin Norris.

I see stars. I see someone controlled by the body. I see a drone.