Hidden deep within conventional astrology is an undisclosed intention, to help you make something of yourself. It is not just yiddishe mamas who define parental accomplishment as providing the world with more doctors and lawyers, and it is not just Western culture which judges a life by its social benefit. For 3000 years poets, storytellers, philosophers and priests have been teaching us the art of creating a self, and astrology has merely delivered a universal tool to the same end with its Sun Sign daily horoscopes. Astrology provides an aesthetic dimension to subjectivity’s game of chess with the world machine, but the aim of the game is to win.

Not necessarily fame and fortune, but something approaching those supremely admired achievements is still unquestioned as the purpose of life by those still desiring entry to heaven and those dutiful to heaven’s creation on earth, if only to convert the world, by force if necessary. Self-improvement is the madness of the House of Constriction in my astrology, but lack of motivation to better oneself and others verges on psychosis in the minds of most. What life discloses is a way forward, and if we don’t take it, some self-defeating mechanism must be involved.

The September Full Moon reflects both the impulse to leap into the traces and the grasshopper threat of not having enough laid by, and in keeping with the ostensible self-disclosure we admire in our delusion, the gambler mourns wasted opportunity. Does the father in the parable welcome the wastrel home because everyone deserves a second chance, or did his own youthful impatience reveal itself as it decayed into world-weariness? How many more eggs can we put into the basket of gender?

What image the prodigal doesn’t live up to, and where it resides, what initiation into the desirable path they receive, and who really desires it, are fraught questions. The imagery, not the morality, of cultural tropes would bear closer examination. The expectations of tiger mums may be deplorable, but would not self-awareness be more effective in discouraging her than stigma? The meditations of astrology on the subject of the vertex may serve better than a lifetime of therapy in the hands of professional imagery.

The image we harbour of the desirable other and the demeanour we develop, unconsciously and reactively, as a projection of our response, is as hidden as the ecliptic from which astrology derives its quantities. Even as avid a stargazer as I could not assert an observational basis for any significance in the altitude of the zodiac due west or east, and naturally I regard magnetic or electrical resonances with extreme suspicion. Previously explored here, the rapidity with which the Vertex can change Signs and houses in and near the Tropics, a huge chunk of Australia, may disqualify it as an element of personality formation. Nonetheless, as offering a spectrum across which to observe in ourselves the mysterious hormonal interaction of coincidentally waxing and waning images of the ideal, the Vertex is a fruitful concept.

As Alan Watts said, “It was a musical thing, and you were supposed to sing or to dance while the music was being played.” The Vertex is quintessential astrology. It is as the music of our soul that it discloses itself, just as the chemistry of photosynthesis discloses itself as wood and height. As the intersection of the western Zodiac and the Prime Meridian it makes no sense, but as the focus of all the important people who come into our lives, and leave them, it discloses the hormonal shades of our interest in others, what it is in them which arrests and seduces our instinctive will to be.

The pleasure of observing sunrise and sunset is part of it, and the degree of comfort I feel in the presence of another. The primordial resonances of east and west are part of it, and the feedback loops of projection. I experience the character of my love-image, and the success or otherwise of its projection, in cyclical patterns. They morph into different forms as the Vertex inhabits different constellations, in other words at different altitudes above and below the horizon, and at different times of life, of the year and day. The higher the zodiac, the more intense and constellated is the effect of the Vertex in the west or the anti-Vertex in the east; the lower it is the more primal and potentially transgressive. But these are my moves. Now you have a dance!

You be the judge. Do you find yourself varying the dosage of your self-medication at these times?

Incidentally, it seems patently obvious to me that conjunctions of stars and planets with the Vertex should be measured horizontally, not along the Zodiac. Here is a particularly seductive alignment in Charleville’s narcissistic Prodigal underworld. Note the configuration of the Milky Way, giving the lie to the synchronous Covenant invisible on the Australian side. 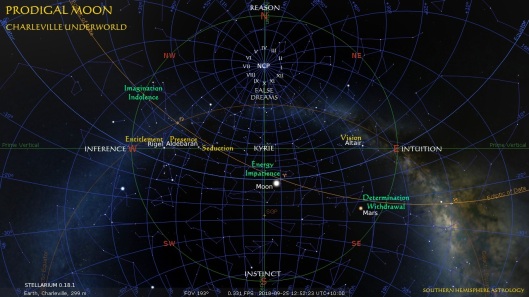 Here’s another one, possibly the hormonal undercurrents of a bleary elevator ride following another $50,000 of inheritance blown on the roulette wheel. 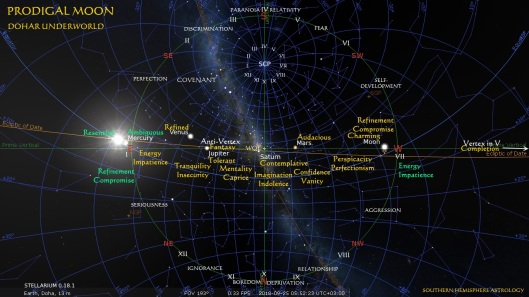 This graphic way of representing or imagining the underworld, as the hidden correlates of the conscious or visible, not only unites the hemispheres, but persistently alerts us to the existence of the Other in ourselves, a partner in the dance. No culture is alien to any other. No way of looking at things is entirely wrong. No perspective is unique, or entirely conscious. There are no opposites in gender. Projection is the very definition of imagery. 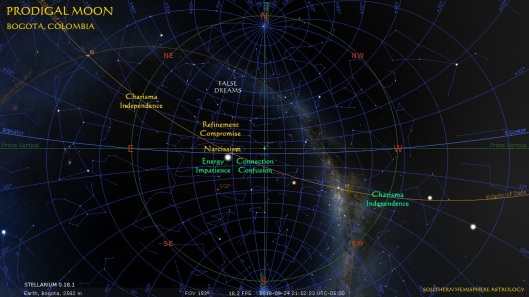 What if the altitude of the Zodiac around the time of your birth, in the evening or early morning according to outhouse visitation preferences, had a big influence on what your parents decided, perhaps in a narcissistic epiphany at the pan, to impose on your meaning in their lives? Must such self-unawareness surely ordain your eventual repudiation? Is “What went wrong with you?” our universal doom? A global government must surely take this seriously, and coordinate biometric data on transnational emotional and imaginative responses to the Vertex, in order to remove parental bias from the resonance of upbringing in our careers and relationships! 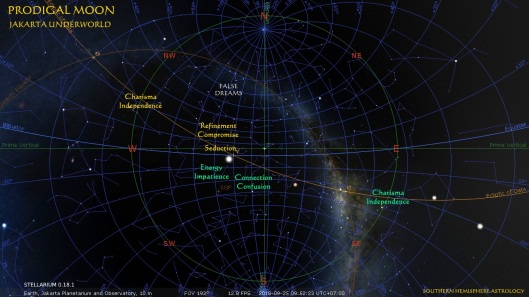 Let it be emphasized that the natural resonance of the Vertex is unifying, that across the threshold of consciousness, across the seasonal polarity of the hemispheres, its Signs are the same, and cardinal directions are interchangeable.

However, unity is a dangerous thing to wish for. Not only could astrology-savvy AI enable police reinforcements to be mobilized in anticipation of conjunctions of a full moon with disruptive angles (cue Charleville), but its design might impose extreme intolerance, of resistance to careers in medicine and the law for example. Our cultures are divided in their attitudes to gender fluidity: artificial reunification might as easily be designed to eradicate it, and prohibit homosexuality as a sacrilege and mental disorder, as be designed to destigmatize its hormonal fluctuations. One could ask, what went wrong with the hormones of Indonesian Islamists? ‘Eternity’, the Vertex in the Ninth House (Aspiration), in the Tropics? Or ‘Permanence’ in the Fourth (Reputation), eternity’s fetish? 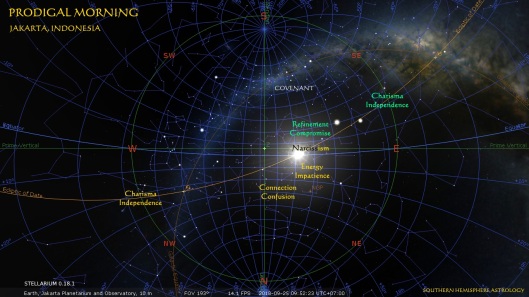 The words of the Prophet belong in the world which discloses itself to childhood. They are the lawns of suburban parks and backyards, evolved to minimize injuries and indelible stains through generations of debate about the Good. They exist in Reason, as binary gender does, but they are made of grass, which is the disclosure of Instinct. You could say that lawns help grass to make something of itself, but they are really weeds dancing with the machine.