[Be prudent. Let the wine flow. And since time is short, leave off far-reaching hopes. Even as we speak envious time has escaped us. Reap what the day offers and put as little trust as possible in the future. Trans. B. Muir]

For there are pleasures which they must have, and are afraid of losing; and therefore they abstain from one class of pleasures because they are overcome by another: and whereas intemperance is defined as “being under the dominion of pleasure,” they overcome only because they are overcome by pleasure. And that is what I mean by saying that they are temperate through intemperance. Plato, Phaedo. Trans. B. Jowett.

Goodbye Michelle it’s hard to die
When all the birds are singing in the sky
Now that the spring is in the air
With the flowers everywhere
I wish that we could both be there. Brel/McKuen.

In the Southern Hemisphere there is a trail leading from the high country, which lies in the direction of Sagittarius A, down across the ridges of Pisces into the meadows of the Ram and the Bull which line the River Lethe. All of the planets are strung out along this trail in this time of calamity, all of them obeying a primeval rule: mind the path! For the trail is precipitous, and fall is fatal. It only seems like yesterday the Full Moon was diplomatically avoiding the subject of castration with the old drifter on the ridge, Uranus, and here we are for the third and last time for 30-odd years in Aries at Ramadan, the two of us quarantined together, fasting in the jaws of apocalyptic pestilence, with the invisible stench of our homeless Father Sky a few days further down the track tainting the decomposing autumn sunshine. 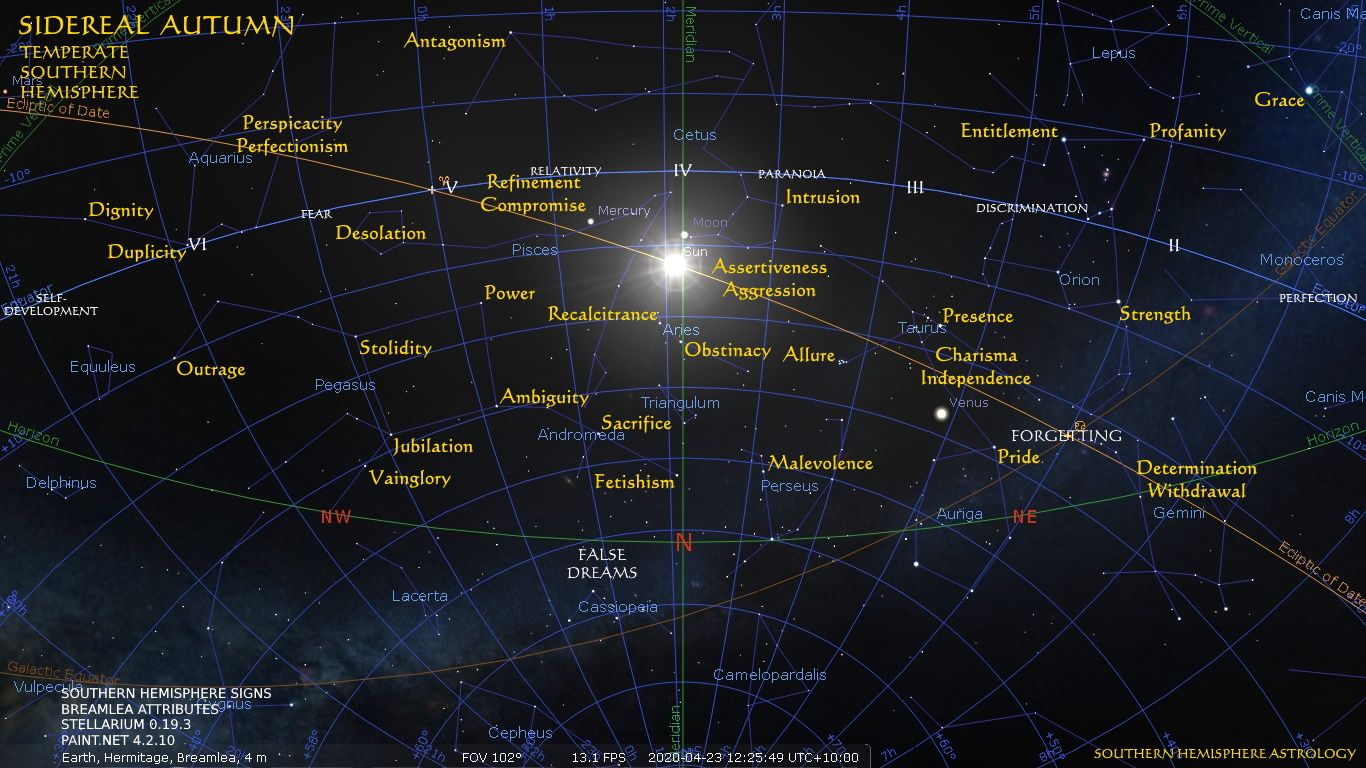 You are welcome to dismiss this metaphor as a guide on your journey, for who would deny the narrative you are at pains to construct for your life? Alas, you may need a Covid-19 test if you deconstruct narrative as relative but cling to your own. Who on Earth began a ‘journey’ at your birth but your ancestors, jostling for reincarnation? And if we go back far enough, 4 billion years, yours are mine, so don’t take it personally when I scorn your journey! And does your journey have a social and linguistic background which makes your claim to ‘go your own way’ a little quaint? Don’t the seasons and the Covid-19 shutdown define it? Remember the Ramadan weather twenty years ago! And that the faithful are heading for the Lethe while Ramadan is working its way back to the Acheron!

If you think that opportunism is the cynical advantage of prevailing anxieties the unprincipled take to enrich themselves, then you are far from sharing the preoccupation with death that tempts the celebrants of enrichment into the giddy abyss of eternal forgetting. What is that smell? The stale toejam of the tragic bride, Andromeda, the bowels of her water-boarded mother, the crotch of homelessness and the hormones of a rutting ram! A lot of bull, perhaps? Is the pursuit of knowledge and truth the foundation of civilisation or the talisman it vouchsafes its loved ones as it lowers their impoverished corpses into the Underworld, or floats them away on the Lethe? 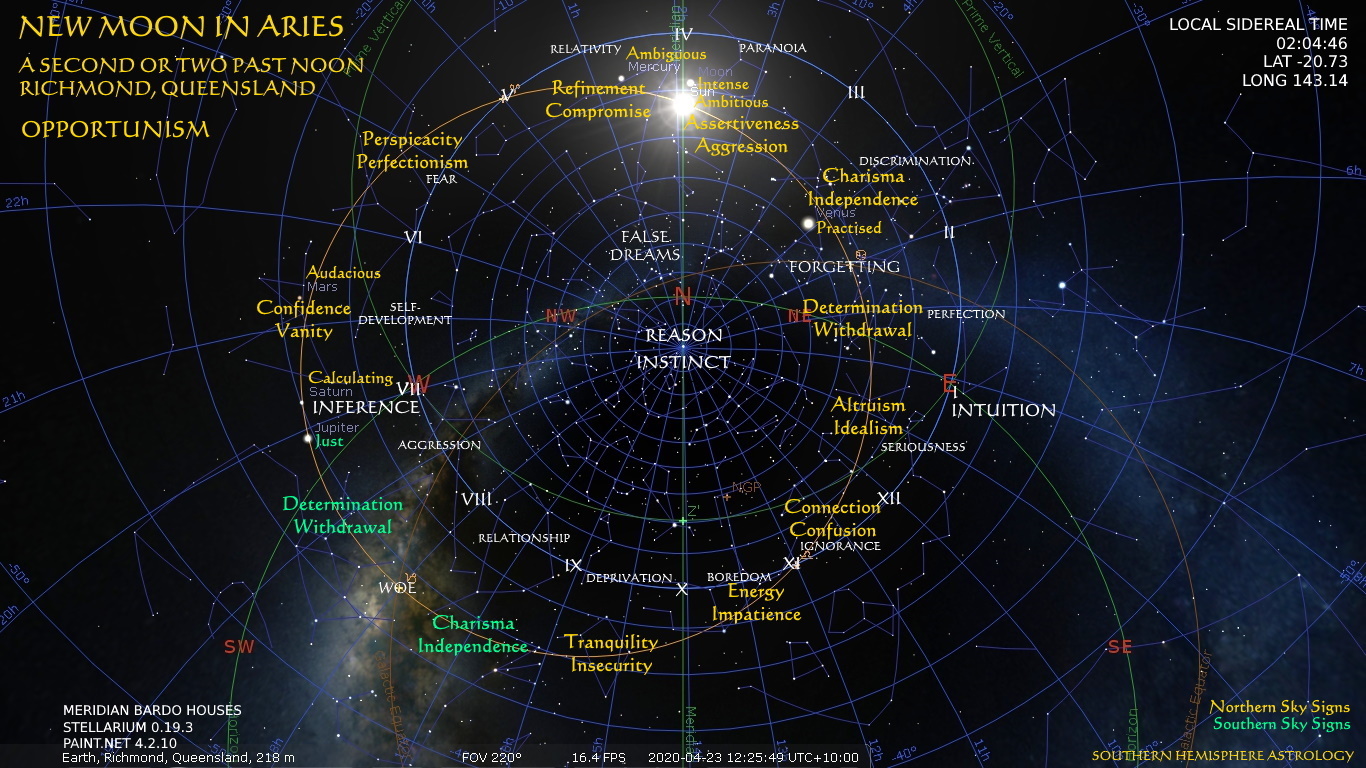 I’ll grant you that when you came into this world what you didn’t know was very important. But as you leave this world it no longer seems important at all, does it? Even though an entire culture be evolving in the pursuit of the knowledge certain others seem to have gained by ignoring yours. There is a germ at the heart of every organism as resilient and adaptive as any virus: you are taught to know it as love. But its formula can be rephrased in terms of what love has taught you to fear, love as a disease overcoming its absence, the disease of limerence. Life has taught you not to fear, not to look down below the ridge. But limerence retreats to medical definitions, and thus do ‘we who are about to die’ fear dying of a virulent coronavirus. The opposite of love was never fear. Only intemperate individuals could cling to such an idea, as dark energy to matter seems to cling, because the opposite of love is its narcissistic dark temperance, silence.

To revisit the concept of ‘country’ as death meditation: if it is true that what you know, including what you instinctively or unconsciously know, is a collaboration between the world as it has formed you according to its needs, and you as you have formed the world according to your needs, then it is true to say that what you know is a constituent of what you don’t know, or that your essence is somewhere between the two, like the history of Australia before 1788, as the essence of a tree is in the quantum uncertainty of the sunlight of its chloroplasts, or as country grows the timber of its nearby star. I strenuously suggest you grab whatever low-hanging branch you can, because to be made of stars is to burn out like them. Better to warm like wood in the hearth of your desire, than to illuminate emptiness a million years after your death. 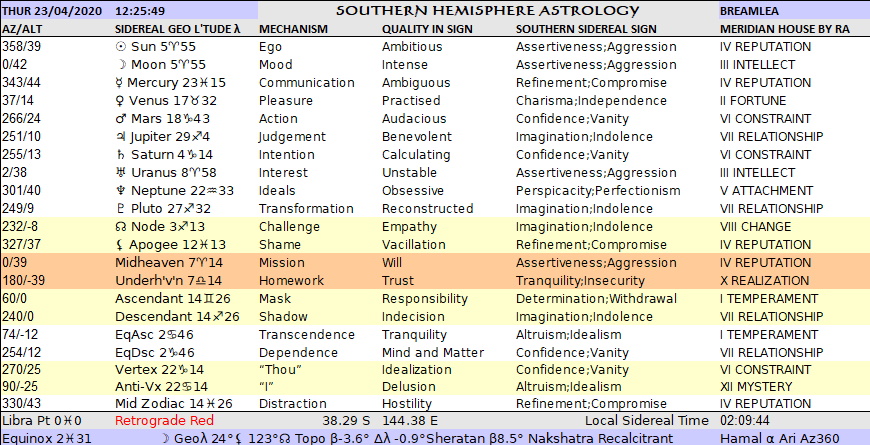 And should I seem terse, or scarcely adequate to the leadership you desire, just continue in the direction you are heading, as you must, in fair weather and foul, under deluge and darkness, one foot in front of the other, on your journey, if the evasion of dizziness can be called a journey. Who did you think you were, once the plug was out of the bath, if not a variation on a universal theme? Strive, one foot in front of the other! Plant your foot carefully in the print of the horde! Live as though you hope for mercy! Carry a rooster in your bag! Saint Peter’s love has not been tested for limerence! Hello? You’re breaking up! God is saying goodbye! Carpe diem!