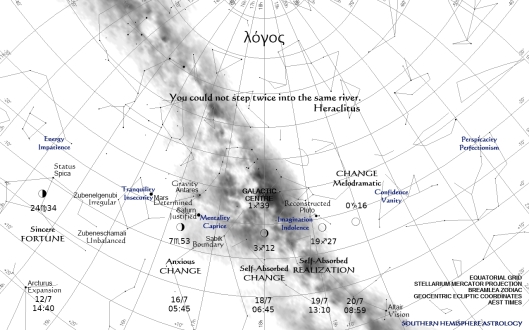 “I haven’t been there for a few weeks. Did you notice? Of course not. You’ve got a busy life, and you’ve got more important things to think about than where the Moon is. I don’t really care. I’ve got my routine, and I just do it. I hear you: what difference does it make if the calendar shows my quarters facing left or right? Right? If you don’t want to know, don’t read me, simple as that. I never expected to go viral, did I? 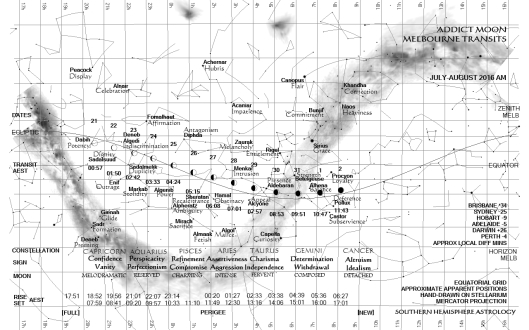 Why do any of you express yourselves? Of course, you have to place your order at Maccas, but really, I’m serious. If your opinion isn’t going to influence someone powerful, isn’t going to change the world, why do you so carefully construct it? Doesn’t matter if you’re gay or straight, why do you find it necessary to have an opinion on same-sex marriage? And why do you think the world needs changing, anyway? Can’t you compromise?

Of course I get sick of going around in circles. Of course I know I’m predictable (hardly to any of you though, I dare say, heh heh heh), but it doesn’t matter to me whether I holiday behind the clouds or on a yacht in the Aegean. What matters is what’s going on in HERE, right? Same as you. I’m not ashamed of what I do. I’m happy! I was over the Angola-Namibia border at opposition, and now I am visible to Eastern Australia in Capricorn(us), and whether you consider me in the northern or southern part of it, I’ve got a brandy, a rollie, and a game on TV. I’m full, in your face, and loving it! 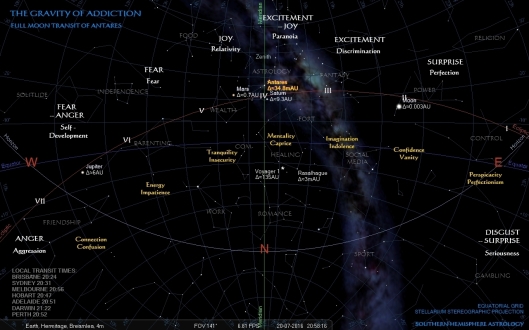 This is my compromise. Hero in my own lunch-hour (sorry if I extinguish you, Emu). Did my father’s abuse and my mother’s compassion make me what I am? Who cares! I’ll explain the chart in a minute, if you’ll just let me finish. Matters of import are being realized at the Meridian, and I’m very upstage in this setting, but who says they’re matters of import? Me! I don’t care if you don’t believe me: Antares is Uriel, the Light of God, and his role is grave! This warden reminds you that your self-importance is imprisoned in causality and consequences, just like mine. I don’t have to tell you what working family-man Mars makes of that. Great-Uncle Saturn on the other hand is anyone’s guess.

And just in case you get too far up yourself–if you’re still reading–there’s a tiny man-made speck towards Rasalgethi (Alpha Herculis, “Head of the Kneeler”, just to Rasalhague’s west), where human imagination put it, and can find it, as I have. It was made by ordinary people like me who find ways of making the intolerable tolerable and pay their taxes. Or have I got that the wrong way around? We pay our taxes, and powerful people make their intolerable tolerable. Can you see where you fit in? It’s an unimaginably big world, but size matters, if you look from the inside!

Addiction is an orientation of the world to the emotional self. In the arms of addiction we give ourselves up to pain. We are centred on it, and the furthest from its release we can be, confirmed in it by painlessness. We are called, and make any excuse; but our stunted, misshapen appearance to the outside belies a miracle of ecological adaptation. For example, as a prisoner, I have been given a lot of counselling on how to stop defeating myself. Thank you. I have adapted my orbit to it.

[Based on Chögyam Trungpa’s Transcending Madness: the Experience of the Six Bardos, Shambhala, 2010, and Lövheim’s cube of emotion.]

Guilty as charged, but have a look at those constellations of addiction, and acknowledge which ones have tipped the scales of passing interest. Do you really want to free your self from all dependency? I tell you what is self-defeating: looking at the transit of Antares and seeing only a scattering of distant lights. I am rather excited in your sky by my discriminating good fortune….”

1 thought on “Full Moon in Capricorn: the Prisoner”