“The last men, far from being the heirs of power, will be of all men most subject to the dead hand of the great planners and conditioners and will themselves exercise least power upon the future.” Lewis, C. S.. The Abolition of Man (Collected Letters of C.S. Lewis) (pp. 58-59). HarperOne. Kindle Edition.

The phases of the Moon are conventions. The mathematical definitions of the relative positions of Sun and Moon on the Ecliptic are real enough, but what they define is imaginary, illusory, transient, relative and nebulous. When the Moon will be in conjunction with the Sun is important for anticipating eclipses and tides, and convenient for dividing the year, but the event itself as dependent arising occurs in nature as a disappearance, an invisible transition from morning crescent to evening crescent lasting several days. You would be right to call any moment in that transition a New Moon, wouldn’t you?

We all ‘know’ that it is the movement of the Earth, not the Sun, which continuously changes the Sun’s background stars, but once again, the stars behind the Sun’s present ‘location’ are invisible, and only tangible as somewhere between which stars are rising in the dawn and which are setting in the dusk. Nonetheless, thanks to the scales of measurement and frames of reference developed in astronomy for thousands of years, we can be confident that if the astrologers tell us this New Moon is happening in Pisces, it is, and if the astronomers tell us Aquarius, we can be confident of that too, and that the wet season the North once associated with the Water-Carrier asterism has gained on it a month.

Such matters as these present themselves for our contemporary scrutiny because the conventions of cultural interplay and civilized discourse seem to have dissolved into the contested perspectives from which they emerged. Southern Hemisphere Astrology focuses on norms at this time of year because Aquarius down here carries the conventional sign which precedes the Autumn Equinox, Virgo, associated with perspicacity tending towards perfectionism, not necessarily the obsessive compulsions you would not be alone in seeing everywhere at the present time. Aquarius upside-down resembles the post-graduate waiter who skilfully manages two armfuls of dishes while imparting a sniff at the conventional choice of wine a mealtime assemblage of newly independent MPs might have made.

By curious coincidence at the moment of New Moon as defined, a divine promise is being given to the good people of the Bowen Basin, where local and indigenous sovereignty has been under attack ever since it became conventional wisdom that the best way to pass on a better world to your grandchildren is to impoverish them, and the best way to beat the colonialist rap is to cede your sovereignty as a mark of indigenous ignorance. Perhaps the Adani coal-mine will proceed, honouring the wishes of the majority of traditional owners, and perhaps there will be fewer numbers in endangered species in the area for the rest of us to be unconscious of. 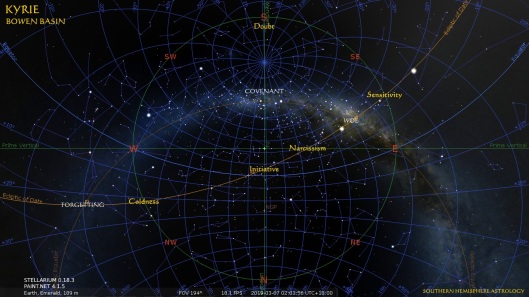 The asterisms and myths of the Zodiac have been influential conventions on at least 500 successive generations, in ways we are as unconscious of as we are of our astronomical motion. These days, the Gregorian calendar and its widespread end-of-year celebrations, the urban lifestyle of the vast majority of the global population, and climate change itself, have largely supplanted the seasonal basis of human behaviour, and general precession will eventually associate every seasonal sign to every constellation, if it has not already done so, especially below the Tropic of Cancer.

Is a coking or thermal coal deposit below the surface or in the underworld?

Should the evaluation of the needs of others be an extrapolation of our needs, an ownership of theirs, or a continuous contestation of both by experts on the nature of ‘Reality’ and ‘The Good’? When it’s a simple matter of projection, why are we always compliant in the wars of the powerful?

The solstices precessed to the Galactic Plane in 1998 CE, and so for as long as recorded history into the future, the Sun’s maximum positive and negative declinations will precede its crossing of the Milky Way, assuming the IAU don’t fiddle. In 2177 CE, the December Equinox will precess into Scorpio in the Breamlea Zodiac. In 2228 CE, the Sun will cross the Galactic Plane on Christmas Day, and cross it New Year’s Day around 2700 CE. In all that time there is one thing that will not noticeably change, as it has not during the millennia of human civilization, and that is the stars in the background of the nodes where the Ecliptic intersects with the Galactic Plane. The Milky Way is as real as the seasons were when mass media began popularizing Sun Signs in the 1930s, as the Underworld Zodiac was when children asked 10 thousand years ago, “Why does the Sun go down?” and as the unconscious was at the dawn of the twentieth century when its geography was desacralized.

I, writing my epitaph, and thou, resonating with it, have this in common: we resist convention, but end up accepting that we belong in a timeless tradition–of accepting the wisdom of our ancestors, unscientific as it might be, as a prescription of who we are–into which we might be seen to have groomed those of our descendants who listened and were grateful for their culture.