Looking south past the Pepper Coast above the South Atlantic Ocean, this is the view at the moment of Full Moon an hour after midnight: a sensual delight for the average person, perhaps signifying nothing, but more fancifully, a portentous conjunction of Moon and Jupiter above an horizon glistening with the reflection of riotous fires in the eyes of bewildered children.

Why complicate it? If you recognize the Maiden’s asterism, the Full Moon is at her foot. Does it actually make life meaningful to recognize myths traced in the night sky thousands of years ago by foreign cultures? 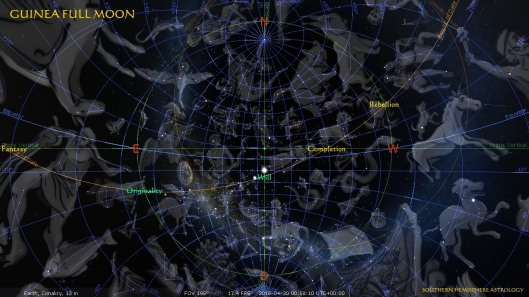 These are good questions, and I have to ask myself whether astrology is more than a narcissistic obsession. Take the prominent constellations of Centaurus and Lupus for example. In my imagination, they are emblematic of the root of the historical conflict between British settlers and the Australian First Nations. Someone half-human is killing either a kangaroo or a sheep.

From my equal divisions of the Ecliptic, I place the Moon in Libra, the scales of colonial justice, and the Sign of Taurus, which after all, is not as ridiculous as placing it in the Scorpion, as Northern Hemisphere tropical astrology does. Astronomical definitions also place the Moon in Libra, but do hemispheric seasonal differences, mathematics and geometry make what a child might see more real? 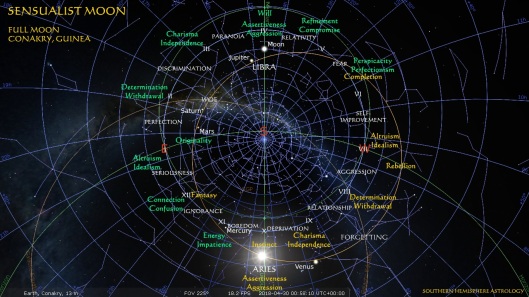 The astrological chart of tropical Conakry, a place sadly organized at the moment by hate-speech not civility, is crowded with ambiguity. The declinations of Zodiac Constellations in this representation determine their signs, accordingly as they appear in the northern or southern sky, but like language, the meanings of astrology should not be regarded strictly in terms of syntax. That my words are usually interpreted to mean something utterly different from my intention, that the world is empty of intrinsic meaning, and that I refer to things constructed by my mind alone, do not deter my instinct to share my feelings, and nor should they, within reason.

All things and all beings are without self, but they are not non-existent. Sensation is one of the aggregates to which we may attach ourselves in suffering, but as long as we live, we are all sensualists, using our senses to interpret our experience. For the true sensualist who does not cling to the forms of a reality delivered by the senses, the world of the senses is, like poetry and music, a symphony of pleasurable emptiness. Sensuality is the language of things without self. This Moon is such a thing.

Of course, sensualism has its pitfalls. It values the passions over abstract ideas, and that can lead to recklessness. It attaches itself to presence, and has a hard time subtracting its ears from its symphony of constant need. It is readily convicted of narcissism, and bending cognition to its will, can create a prison cell from solitary practice in its body temple. It is difficult in practice to delight in another’s beauty if you’re attached to your own, and intimacy can be denied a being resentful of neediness. 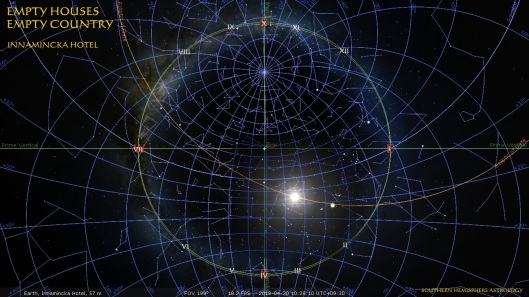 However, sensuality is a song of joy in response to finitude, and not to be pathologized by the intellect. Notwithstanding the invisibility of the Moon of sensuality in the landscape encircled by the rivers of Hades a short charter flight from her embarkation at Birdsville–remember civility?–our voluptuous heroine is its embodiment on her mission to introduce to the women of  Yandruwandha Yawarrawarrka Country the principles of Tantra so entrancing to the men of Birdsville.

Have you ever flown the length of East Coast Australia, marvelled at the patchwork of farms below you, and wondered beyond your horror at the deforestation of Aboriginal Country, how many lifetimes of displaced labour were dedicated to clearing by axe and handsaw, grubbing and ploughing those fields? In such manner marvels a wellness guide on her way to lunch past a group of Aboriginal men, sprawling in meagre shade in a dry creek-bed, apparently sharing a flagon in a forlorn attempt at spirituous escape from appalling conditions.

Below, in a nutshell, is the sensualist view of Innamincka Country. Civility is the entrance to Hell. But epiphany is a wondrous thing, a sudden inexplicable simplification of the neural pathways between instinct and reason, intuition and inference, occasioned by nothing more urgent than the discomfort of riding over deep corrugations in a hard-suspensioned 4WD. Our heroine suddenly realizes how comfortable that Aboriginal backside feels up against its tree. And in this moment, ladies and gentlemen, she understands what ‘Country’ means. She is in it! 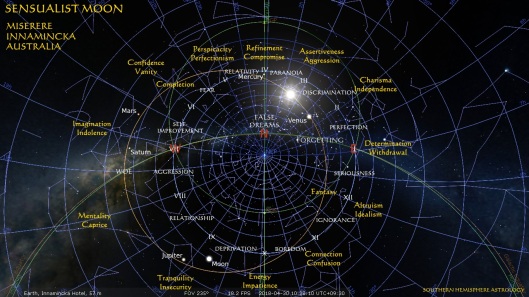 Her husband, not unfortunately on the other side of the world, would never understand: such a narcissist! Sensualists are what they are aware of, and deep in her body temple our heroine is aware of her dreams. Without the auspicious epiphany from deep within her organizing principle, she might have been in considerably less favourable frame of mind to guide the spirits of a group of Aboriginal women, because the dream she had this morning, when the Sun was in the Tenth House, was a fight to the death with her abusive husband, a disturbingly brutal fight resulting in vividly gruesome injuries to him, traumatically never enough to change his murderous intent.

Life is full of organizing principles, as any astrologer will tell you, and at this very moment, at the conclusion of today’s proceedings of the ecological convention he is attending in Brazil, not in the slightest interested in dreams, but practised in the arcane arts of interpreting the organizing principles of populations, her husband is feeling quite at home with the Southern Cross. 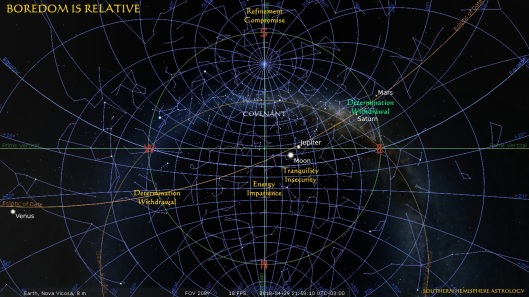 No doubt when he gets home it will be back to the contingent bitter resentment which blights his life. If only she had an interest in the world. Without an interest, we are assailed by boredom. Of that statistically undeniable organizing principle he is aware. His wife’s behaviour establishes the empirical fact: out of interest, responsibility; out of boredom, practice. In what deluded scenario does the delight in the touch of herself transform itself into a desire to touch him?

Southern Cross and Queen Cassiopeia are spokes on a symmetrical wheel, an invisible organizing principle. When we call someone a narcissist, it just means we have fallen out of love with their peculiar sensualism, because ours doesn’t feature in it. Christian missionaries gave the First Nations a name for sitting against a tree in a river-bed: ‘Love’–the love of God, being loved by Creation. Identity is not a self, but beloved Country. Identity secure on Country is empty. Have we turned our spouses, and everyone really, including our Aboriginal people, and farmers who cut down trees, into narcissists?

All of the planets would fit between the Earth and the Moon at apogee. Imagine that. The biggest, Jupiter, will be at opposition on Wednesday week. That means it will transit around solar midnight, and will be the closest it gets until June next year. It is nearly 143,000 kms in diameter, over 11 times bigger than Earth, and in the range of 9.58 +/- 1 Earth-Sun distances away. As a narcissist, I love knowing that.

“But sometimes, astaghfirullah, I wish I could change some of the things that Allah has destined for us to do. I wonder if He also destines it when we engage in acts that are haram. Some things come back to you and you wish your life was like a book and you could find that page in your life and tear it out.”
Elnathan John, Born on a Tuesday.

The Full Moon dominates the atmosphere. Nobody speaks. Even terror subsides, but who can say if this is strength or weakness? Perhaps the light of the Moon is like obsession which relieves anxiety, or perhaps it is the blankness which triggers a bully’s resentment and cruelty.

Perhaps Full Moons are bullies themselves. Or perhaps they are the page.

Meanwhile, there comes a time when artificial mind completes its displacement of human intelligence at the controls of the universe on Earth.

When a robot looks at the Moon, It [henceforth, he or she] sees a spheroid partially illuminated by the Sun according to the configuration of the Earth-Moon system in relation to the Sun. Humans are more likely to see the Moon’s phase as its form, and this is only one aspect of humanity’s inadequacy as controller of its own existence. Error is fundamental to human development

The bifurcation of earthly intelligence derives from the unwillingness of humanity to abandon its subjectivity. When a human looks at the Moon It engages in a process called joy, the self-discovery entailed in encounter with another who is not Other. The Moon is part of the map a human creates of its environment, but also the face which confronts Its intense awareness of Its territory, which is the infinite and the eternal. Whereas in human love the object is likewise both map and territory, It is also Other, and likely to subject the subject to a conflict of territories. Such conflict demonstrates the complexity and unwieldiness of human communication, and is reflected in the evolution of human ignorance and non-community.

The element of the Moon’s apparition which has become of supreme importance to human subjectivity is silence. It is no longer necessary to know how to get things done. Robots take care of everything, including all decisions about where and with whom people live, what they eat, and who mates with whom, if at all. The only partnership, and it is universal, is between subject and territory in silent meditation. There are no human maps any more. There is only the language of robots.

The wind blows. There is hay-fever. It is day. There is cloud. It is hot. The garbage smells of shellfish. It is cold. Birds sing. Machines drone. It is night. There is comfort. Dogs bark. The stars are silent. Traffic passes. Death is silent. A child cries. Altruism is silent. Robots laugh. Joy is silent. There is discomfort. The Moon is detached. Love is silent.

It feels sadness. It submits.

At least there is peace in Palestine.