“After all, what is identity but the slow, lifelong accretion of gazes: us looking at ourselves being looked at by others? What we see is, largely, what they see, or what we think they see. And when they turn away, when we become unseen, in a way we cease to be.” Elitsa Dermendzhiyska.

“Thus conscience does make cowards of us all;
And thus the native hue of resolution
Is sicklied o’er with the pale cast of thought;
And enterprises of great pith and moment,
With this regard, their currents turn awry,
And lose the name of action.” Hamlet, III, i.

“He who fights with monsters should be careful lest he thereby become a monster. And if thou gaze long into an abyss, the abyss will also gaze into thee.” Nietzsche, Beyond Good And Evil, IV, §146, trans. Helen Zimmern.

That the Sun is in the Constellation Gemini, the Northern Sign Cancer and the Southern Sign Capricorn is of interest, but not arrestingly so. Nor is it of vital concern whether the primal force of earthly existence is female or male—we choose whichever we like—although it has amused us to plot the rhythm of the Moon’s phases as locked in a striving to escape a primordial envy of female power. It is the dynamism of Opposition which now resonates with the strongest signal, not only because the Signs and genders of Sun and Moon are interchangeable at Opposition, but because of the influence we have imputed to the Milky Way and the crossing of its rivers of the Underworld.

From the Lethe we dry off our responsibility; from responsibility we clothe care; care gives rise to anxiety; from anxiety comes being-toward-death in the effort to maintain buoyancy, the meaning of who we might be, as we flail across the Acheron to do quixotic battle with the denial of authenticity. And this drama is projected into the heavens above and below. Yes, we are made of water; yes, we go to water. The Full Moon of Sagittarius is hidden in the sack of the Sun and Earth in Gemini as a sublimated knot of anger and hurt, a recurrent nightmare, a hard-wired secret, an unexpiated unkindness, a solvent of lust and revenge: the germinating seed of an Elm rattling to be festooned with False Dreams at the gates of Utopia.

Do you identify with Gemini for some reason? Have you ever been recognized as a ‘Gemini’? Do you in fact resemble it? Or have you never seen it? It is visible in the night sky between its heliacal rising in September and setting in May, at the nightfall meridian in March. And it really does look like a pair of twins, or two buddies of either gender or both, or two sides of the same coin, Sun and Moon, North and South, like being a self, and knowing the law, daring and caution, day and night, anima and animus.

Validation, the ghost which haunts the faces of yesterday’s somebodies, reverberates like the reflected reflection of the existential enquiry, ‘What happened?’ You may well have accustomed yourself to the belief that you surpassed your parents, but you know that the back of your head indicates that you need a haircut, and has not surpassed the emperor’s or the prophet’s. Is it possible that lighting merely shaded your followers, your students, even your children? And does the improbably grotesque approbation of the satyr, somewhere between the comic and the tragic, emulate Gemini’s humanity, or merely notch the animal shaft it saves for perfection?

As should be evident by now, my astrology of the Southern Hemisphere is evolving from the bottom up, in every sense. It is beginning to codify Southern observations in Northern terms, as every language must submit itself to translation, but essential elements of traditional Northern astrology are missing and must be supplied. For instance, every bright star of the Northern sky has a name, associated through millennia of common usage with mythical figures, folk stories, parts of the body, humours, remedies and the like. Despite the best efforts of colonial anthropology, and against the background of catastrophic language loss, such a vocabulary exists in the South only in piecemeal and ambiguous form.

As a discourse, astrology must relate to reality as it is interpreted across a vast range of experience. In order for it to be shared, it must have a lexicon, but no language begins with a lexicon, and develops one only as its speakers discover they mean the same thing. Obviously, the basis of shared meaning is success in expressing what you want to say, and that desire comes first: the basis of language is interplay, with the emphasis on play. I observe phenomena of the Southern sky which you don’t, and I want to share what they mean to me. I want to play. It’s as simple as that.

That is how and why this Moon comes to have a peculiar Southern name.

As the midsummer Moon in the North riding low in the sky, it has a traditionally calming influence in the winter sign of dogged determination, but in the South, in the middle of winter, Sagittarius nears the zenith, and bears the tropical sign equivalent to the Northern sign of summer, Cancer, the glorious potential trap of the imagination. The polarity of these signs eloquently represents our contemporary predicament. Assailed by aggressive assertions of distinctive identity, we nevertheless cling to a faith in our connectedness, despite daily acts of extreme non-acceptance which begin to define the insipid defensive culture they reject. Like the good burghers of Nazi Germany, we are learning how to tacitly disown propaganda as the only way to protect our values in compassion and inclusion from stigma and violent enmity.

The voice which stands out as unacceptable, because it distinguishes itself from propaganda, is no other than the voice of the zealots who gave independence to Argentina, and in wave after wave through the nineteenth and twentieth centuries, to polities around the world. What is independence? Why are we witnessing its renewed contesting  all around us? What is the self we assume in self-determination? Must we renounce the security and comfort bequeathed by the zealots of our patriarchal and colonialist history? Will we all be happy in the swamp when the zealots of resentment have calmed down?

If the rabbit lives in hardship, she has few babies and the farmer can tolerate her. But it is the instinctive mechanism of rabbits in good times to make up for lost procreation, and it is this instinct which threatens the survival of farmland rabbits more than any other factor. The farmer must declare war. In plain words, the rabbit instinct defeats itself: they kill their offspring by having them; or they wouldn’t need to bear so many if they didn’t bear so many. Is this an analogy for what is happening in human communities? Is it time to fight even though we know we will lose? Is the instinct at war with reason? Does the left hand not know what the right hand is doing?

Our days revolve through one madness after another, as the Moon’s full phase in each of the twelve houses around the world fittingly demonstrates. In Argentina, it is passing from paranoia to ambiguous survival in relativity, but in Washington, it is agonizing in the third house.

If we rotate our view west, the Moon is reflecting nicely the discrimination which our material survival drives over Mexico City, and the perfection we throw tantrums to demand over Pitcairn Island.

As we cross the Pacific we catch up to the setting Sun, when animal seriousness and ignorance lurk opposite the constricting complexities of afternoon attachment. Then we come to Australia, where east and west divide the world soul between boredom and deprivation, clinging to the future and clinging to the past. Things are always of great import in hell. In mid-morning India, profound emotional difficulties underlie the last swagger of gender traditions. Now, as we reach the early morning Middle East, the Moon is in the house of aggression. 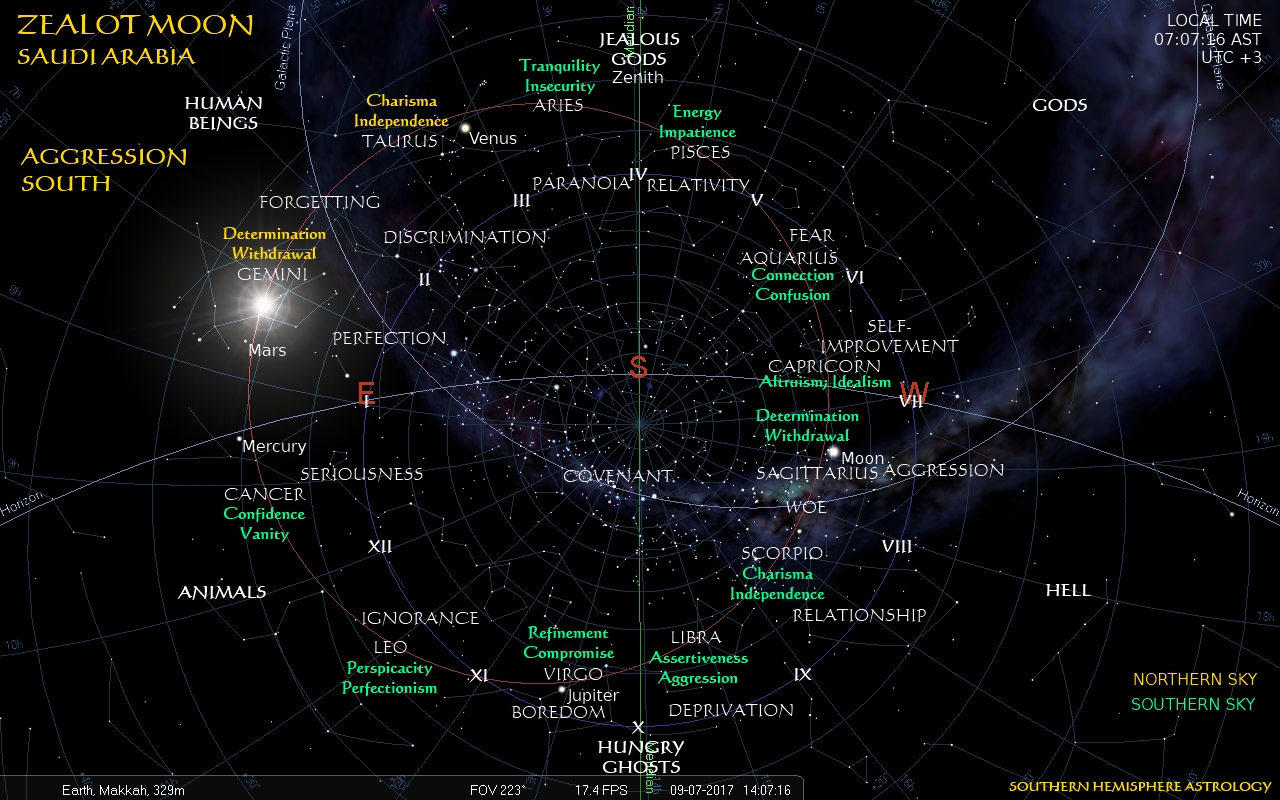 Paradoxically, we cannot linger if we wish to get maximum significance from this moment. The Moon in European and African western skies is dealing with our most pressing concerns in the dawn, with dreams of divine help to overcome intolerance and instinctive imperatives. 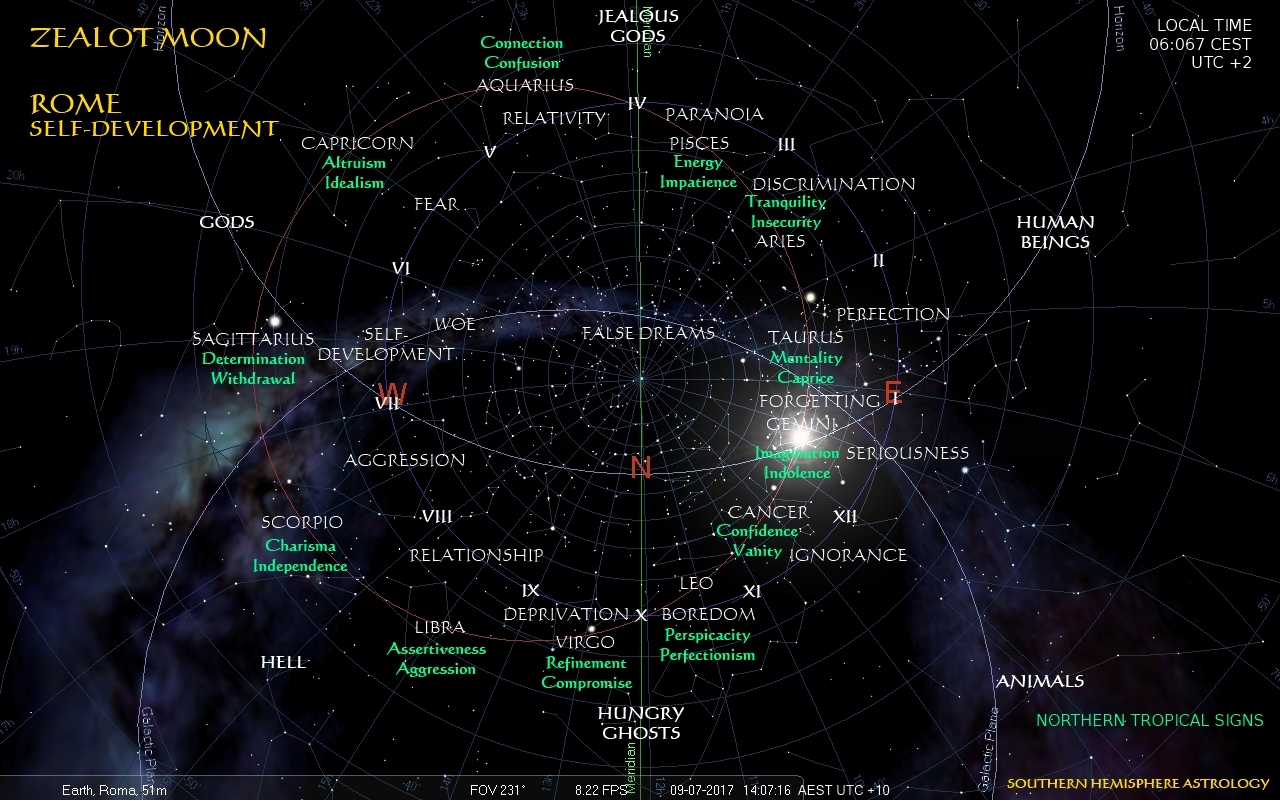 Perhaps withdrawal is the only way into heaven, as a northern orientation of the zodiac in the style of the South suggests. The vanity of Cassiopeia and her culpability in the sacrifice of Andromeda are perpetually represented at the elms near the entrance to hell by a justly deserved waterboarding chair. You want to change the world, right? As much prone to zealotry as you, but also, as a clock-watcher drawn to the infinite ways astrology can tell the time, I reckon you boring lecturers need to look north.

When we screw our eyes shut in grief it is not to stop the tears, and it is not to lock out rationality so that we can indulge, but it is because we are overwhelmed by something which must be protected from expertise as the deepest, most precious part of us, the spirit we offer in play, but are in danger of losing in dialogue. It is all vanity, which we don’t need to be told. All that is left of our whirlwind tour, before we head back across the Atlantic to North American midnight paranoia, is the fear of Western Europe as it awakens to the effects of its addictions in the early hours of another sleepless morning.

There is something demeaning in the proliferation these days of experts in motivation, nutrition, self-packaging, wellness, healing and the like. The factories are all closed, so I accept their existence, but their pitch is that life’s problems are delusions, and a trap they know how to spring. Bodhisattvas delaying nirvana for the sake of those who would be left without them in the coils of Maya, they are zealots in the vanguard of our battle with ourselves. What is demeaning in that is its erosion of faith in those who have already fallen, our forbears and the icons of our traditions, our continuity. I would be more comfortable in the company of experts if there were more explicit admission of the discriminatory symptoms they share with their clients, more respect for self-administered cures and compensations, and acknowledgement that when delusion goes, connection often goes with it.

Fitzroy in inner-urban Melbourne was a dangerous hippie haven once, teeming with atheist, Catholic, trade-unionist and Aboriginal zealots. Today, only conscientious caste-members and the usual contingent of mentally-ill criminals remain. Whenever a strident voice aches into the sky with the news that the world will end, because it is evil, corrupt, ignorant or unkind, they all say, you’re just healing.